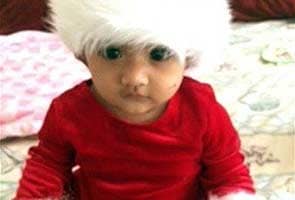 Bridgeport: A family friend, who has been charged with killing abducted Indian baby Saanvi Venna and her grandmother, has allegedly told the police that he dropped the baby as he wielded a knife and the grandmother charged at him during a botched kidnapping, authorities said on Friday.

The accused, Raghunandan "Raghu" Yandamuri, targeted the family for a $50,000 ransom because he knew both parents worked, and he left copies of a ransom note, according to a police affidavit filed in a Philadelphia suburb.

"It's up to you to decide, do you want your 1-year-old or five months of your income?" the lengthy note said.

Ten copies of the note were left at the family's King of Prussia apartment, but no one ever contacted the baby's parents, both software engineers, after the grandmother was found dead Monday and the baby went missing.

Authorities instead found the body of 10-month-old Saanvi Venna in a bloody white dress early on Friday beneath a bench in a basement fitness room at the sprawling apartment complex where Yandamuri and the victims lived.

The 26-year-old Yandamuri, interviewed on Thursday as police canvassed the family's friends, had told officers where to find the body, District Attorney Risa Ferman said.

Investigators had hoped to find Saanvi alive even as the week wore on. But she may have been dead before she left the apartment, Ferman said. Yandamuri told police that he put a handkerchief in her mouth to quiet her, tied a towel around her head and put her in a suitcase before he left, according to the affidavit.

Yandamuri was being held without bail on two counts of murder, kidnapping, robbery and other charges pending a preliminary hearing next week. He does not have a lawyer and did not enter a plea at a brief arraignment on Friday afternoon. He told a judge he is not a US citizen and was given time to make a private call to the Indian consulate.

The baby's father, Venkata Konda Siva Venna, and mother, Chenchu Latha Punuru, moved to the United States from India in February 2007 and moved into the apartment in June. The ransom note referred to them by family nicknames, leading police to hone in on friends and acquaintances.

The paternal grandmother, 61-year-old Satyavathi Venna, arrived from India in July and was scheduled to return home in January.

She opened the door to Yandamuri on Monday morning to see he was armed with a kitchen knife, authorities said. She retreated to the kitchen, while he picked up the baby from the couch, the affidavit said.

Yandamuri told police he dropped the baby and the grandmother came toward him and walked into the knife, leaving a deep gash in her throat, the affidavit said.

Yandamuri, who lived in a different building than the parents, told police that he had printed nearly 200 missing-child posters at work, distributed them and attended a vigil for the baby. But he later detailed the botched crime to police and said he had stolen jewelry, some of which he threw in the nearby Schuylkill River, the affidavit said.

Promoted
Listen to the latest songs, only on JioSaavn.com
A throng of people jeered at him, shouting "Hang him!" and other taunts, as he was led into court Friday in a bulletproof vest.

"We had been hopeful that Saanvi was still alive," said Ferman, the prosecutor. "Tragically, that is not the case."