Female crocodiles lay 50 to 60 eggs and the hatchlings usually emerge from the nests after 70 to 80 days of incubation period. 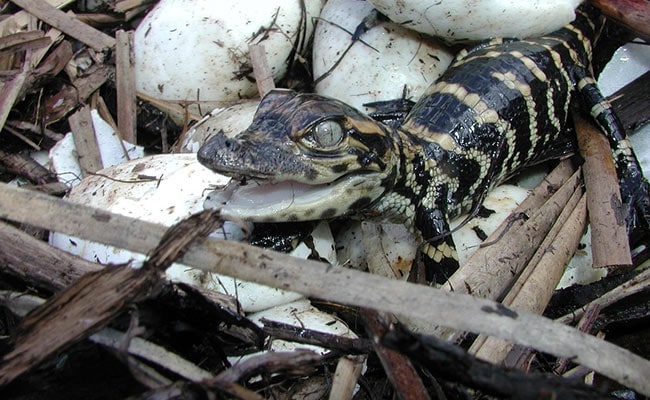 Forest personnel have spotted a record number of 101 nesting sites of the estuarine crocodiles.

Hatchlings of estuarine crocodiles have started emerging from the eggs and making their way to various water bodies inside the Bhitarkanika National Park in Odisha, a senior forest official has said.

After coming out of the egg shells, the baby crocodiles were seen loitering aimlessly before hopping into the water bodies at the national park, he said.

The emergence of hatchlings has commenced since the last three days and would continue for a fortnight, Divisional Forest Officer, Rajnagar Mangrove (wildlife), Forest Division, Prasanna Kumar Acharya, said.

This natural phenomenon marks the culmination of the annual breeding and nesting season of the endangered salt water crocodiles.

The forest department has engaged ground staff to keep a close watch on baby crocodiles to ensure that they do not fall prey to predators, he said.

This year, forest personnel have spotted a record number of 101 nesting sites of the estuarine crocodiles in the national park, Mr Acharya said.

"The increase in the number of nests is indicative of the success of the conservation measures undertaken by the state forest department," the DFO said.

Female crocodiles lay 50 to 60 eggs and the hatchlings usually emerge from the nests after 70 to 80 days of incubation period.

With the mortality rate among crocodiles being very high, hardly one out of every hundred crocodiles born grows into an adult. The babies are usually devoured in the wild by predators, the DFO said.

The sanctuary was out of bounds for tourists from May 31 to July 31 in view of the breeding season of these reptiles. The ban on tourists was necessary as human interference can turn the crocodiles violent.

Mangrove wetlands in Andaman Islands are also home to these species, but it cannot match the density and population of salt water crocodiles in the wild habitats of Bhitarkanika.