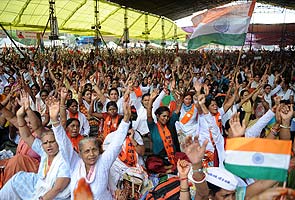 New Delhi: On the first day of his protest camp at Delhi's Ramlila Maidan, 20,000 people gathered to support Baba Ramdev, establishing the yoga guru's star power. Many of the people in the audience travelled thousands of miles by bus or train. Indian flags were waved by young children.  There are big posters of the charismatic yoga guru all over. He will fast for three days while lobbying against corruption.

His impressive turnout comes a week after a hunger strike by activist Anna Hazare and his aides saw a lymphatic response. They ended their fast by announcing that Anna would not contest elections, but that his aides would launch a political party.

Ramlila Maidan was also the epicentre of Baba Ramdev's movement last year. That sit-in ended with a midnight police swoop that turned violent; the Supreme Court indicted both the police and Baba Ramdev for acting irresponsibly and putting the large crowd at risk. This time around, the police says, it is prepared to handle 30,000 people.

Though his mission is to pressure the government to recover crores of black money or untaxed income hidden by Indians in foreign bank accounts, Baba Ramdev retailed the Lokpal Bill, the anti-graft legislation that has been the raison d'etre of 75-year-old Anna Hazare's movement for the last 18 months. "We want a strong Lokpal Bill," he said, addressing an attentive crowd.  The bill, which creates a national ombudsman agency called the Lokpal, has not been approved yet by parliament.

Baba Ramdev suggested that the Bill be  made a law immediately; minor changes to address the concerns of civil society activists or political parties could be made through amendments later. However, the government should not interpret that as a sign to push through "a sarkari (government) Lokpal Bill," he warned, from a 20-foot high platform constructed at the end of a vast tent.

"A sarkari bill will be like a sarkari CBI," he said, referencing the common criticism that the country's top investigating agency is used to serve the party in power by targeting its opponents and protecting its friends.

Differentiating himself from Anna's aides, who have attacked ministers from the ruling Congress, Baba Ramdev said that he has no political agenda and will not target any political party. He is, however, closely backed by the BJP - recently, party president Nitin Gadkari greeted him publicly by touching his feet, a deferential gesture of respect that drew much criticism.

"He is our hope for the future. He will save this country from the politicians," said Amulya Kumar, a farm laborer from Bihar, who was holding a small bundle of clothes and food. Along with his teenage nephew, Kumar had traveled two days by train from Bihar's poverty-stricken Munger district for the rally. Like many others, he would lunch at   makeshift kitchen staffed with humdreds of volunteers who cooked and served spicy aloo-puri.

Baba Ramdev and Anna Hazare are championing anti-corruption measures at a time when scandals involving voluptuous graft have tumbled out into the open.  Many are being investigated in courts, conveying the impression of an unaccountable political class and governance bereft of any sort of probity. But the reason that Anna and Baba Ramdev were able to strike a chord with middle class India is on account of a venal system that is navigated in everyday life.

At the camp today, 50 mobile phones were stolen; the culprits were caught and  identified. Baba Ramdev said they would not be punished. "Go after the big fish," he said.