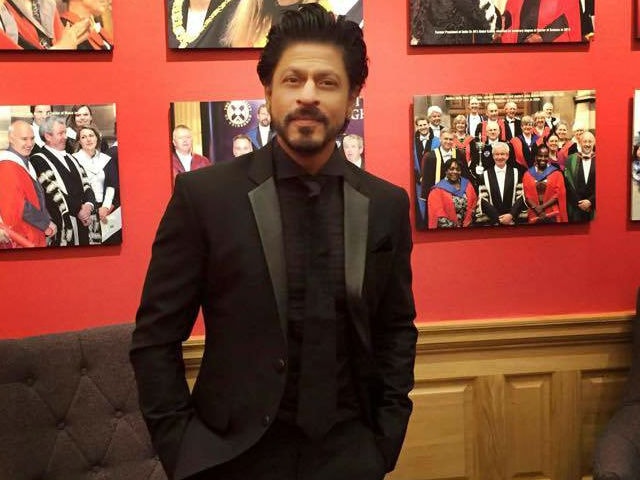 Mumbai: Bollywood superstar Shah Rukh Khan, who has a string of hits from "Baazigar" to "Chennai Express" over a career spanning 27 years, turned 50 today and expressed gratitude to his millions of fans.

To wish the actor on his milestone birthday, his fans started gathering outside his bungalow 'Mannat' since the wee hours.

Shah Rukh came out to greet them and later took to Facebook to say that he is humbled by the love showered on him by his admirers.

"Right now so humbled by the attention and love being given to my Birthday. Didn't ever realise living will be so beautiful. Thanks all," an emotional Shah Rukh posted.

On his 50th birthday, Shah Rukh took to social media to unveil the second teaser of his much-awaited film "Fan", which provides a glimpse of Gaurav, the biggest fan of the biggest movie star.

"Today as I turn 50 I turn 25 again- for all the years of love you have given me, I give you my most heartfelt creation. Gaurav the FAN. You and I are a Belief! ?#?IAmGaurav? and meet me here," Shah Rukh posted alongside a link of the teaser of the Maneesh Sharma-directed film.

Shah Rukh made humble beginnings on the small screen, featuring in shows like "Fauji", "Circus" and others. After having a successful stint on television he turned towards Bollywood with "Deewana".

Initially he played anti-hero parts in films like "Baazigar", "Darr", "Anjaan" and also appeared in comedy, drama and romantic films.

Though he has acted in films across genres but he came to be known as the 'King of Romance', who mesmerised everyone with his charm in films like "Dilwale Dulhania Le Jayenge", "Mohabattein", "Kuch Kuch Hota Hain", "Dil To Pagal Hai" and "Rab Ne Bana Di Jodi" among others.

His second stint on TV was when he replaced megastar Amitabh Bachchan for a season as the host of "Kaun Banega Crorepati" in 2007. A year later, Shah Rukh hosted another show "Kya Aap Paanchvi Pass Se Tez Hain". He also appeared in "Zor Ka Jhatka: Total Wipeout" the Indian version of American reality show "Wipeout".

Besides his love for cinema, SRK has a penchant for video games and sports. He is the co-owner of the Indian Premier League cricket team Kolkata Knight Riders.

Currently, Shah Rukh is busy finishing the shoot of Rohit Shetty's "Dilwale", which will hit theatres on December 18. It will be followed by the release of Aditya Chopra's home production "Fan" and Rahul Dholakia's "Raaes".