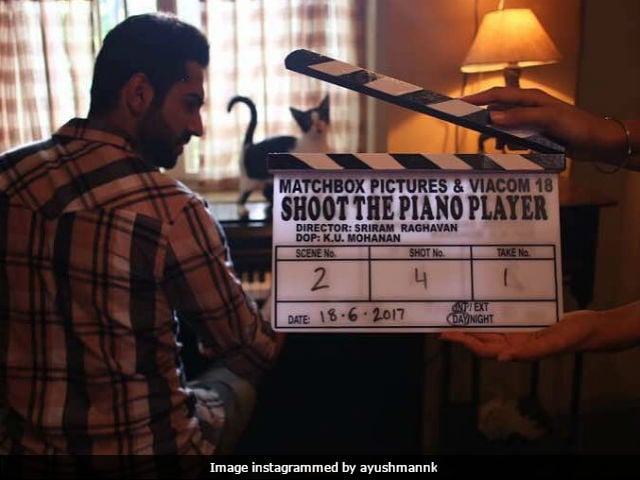 New Delhi: Actor Ayushmann Khurrana has started filming for director Sriram Raghavan's next, titled Shoot The Piano Player in Pune. The 32-year-old actor shared the news with his fans and followers on social media last night. Ayushmann Khurrana shared a picture of himself in which he can be seen playing the piano. "I missed the match. But started something really exciting. Great day at office on day 1 in Pune. Sriram Raghavan's Shoot The Piano Player. #ShootBegins," he wrote. According to a report in Ahmedabad Mirror , Shoot The Piano Player also stars Tabu and Radhika Apte in lead roles. They are expected to start shooting for the film this week.

"Radhika was signed recently but had been prepping for the part for a while. Ayushmann, who plays a musician in the film, started attending workshops two months ago, while Tabu kicked off prep last month. Radhika and Tabu will join Ayushmann in Pune for the first schedule this week," a source close to the development told Ahmedabad Mirror .

I missed the match. But started something really exciting. Great day at office on day 1 in Pune. Sriram Raghavan's Shoot The Piano Player. #ShootBegins

Actors Vinay Pathak and Ashwini Kalsekar, who earlier worked with filmmaker Sriram Raghavan in Johnny Gaddaar (2007) and Badlapur (2015), will also feature in the film, the source added.

This is the first time filmmaker Sriram Raghavan has collaborated with his Film and Television Institute of India (FTII) batch-mate, K U Mohanan. Mr Mohanan is the cinematographer of Shoot The Piano Player.

"This is Sriram and Mohanan's first feature film. This schedule is expected to go on for 16-18 days, after which the team will take a break and resume by July-end in Mumbai," a source close to the development told Ahmedabad Mirror.

Promoted
Listen to the latest songs, only on JioSaavn.com
Shoot The Piano Player is being co-produced by Viacom 18 Motion Pictures and Matchbox Pictures. This is the first time that Ayushmann and Tabu will be working together.