Prime Minister Narendra Modi's support for security operations against Rohingya insurgents in Myanmar comes at a time when the South-East Asian country's de facto chief Aung San Suu Kyi is under international pressure after the exodus of thousands from the Rakhine state into Bangladesh. 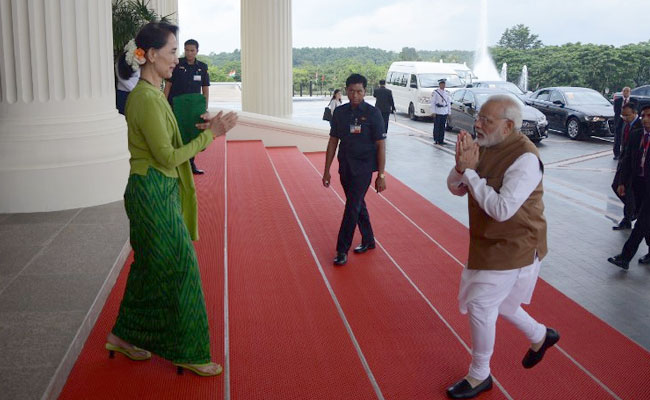 Nay Pyi Taw: Prime Minister Narendra Modi said India shares Myanmar's concern about "extremist violence" in its Rakhine state where security forces have been engaged in a bloody battle against Rohingya insurgents, forcing thousands of people to flee neighbouring Bangladesh and India. About 1.25 lakh Rohingya refugees have crossed into Bangladesh in the last two weeks after a fresh surge of violence.

On his first bilateral visit to the eastern neighbour to cement ties and counter the Chinese influence in the region, PM Modi and Myanmar's State Counsellor Aung San Suu Kyi also vowed to combat terror and boost security cooperation.

In a statement after talks with Myanmar's de facto chief Suu Kyi, PM Modi said India understands the problems being faced by Myanmar.

"We thoroughly understand the challenges that you have been facing. We are partners in your concerns, over the loss of lives of security forces and innocent people due to the extremist violence in Rakhine State," PM Modi said.

New Delhi's support for the security operations comes at a time when Nobel Laureate Suu Kyi is under international pressure after the exodus of thousands from the Rakhine state into Bangladesh, many of them accusing the military of large-scale arson. Aung San Suu Kyi's office has dismissed much of such claims as a "huge iceberg of misinformation".

PM Modi hoped that all stakeholders were able to work together to find a solution irrespective of the size of a problem that would ensure peace, justice and dignity for all and respect Myanmar's territorial integrity.

For ordinary citizens, he spoke about projects being carried out with Indian cooperation and announced India would not charge its nationals a fee for visas to India.

PM Modi's statement did not refer to Rohingya refugees but the BJP's national coalition in Delhi has already made it clear they were not welcome to India. India estimates nearly 40,000 Rohingya Muslims have already made India their home over the last five years and has announced plans to deport the illegal immigrants back to Myanmar.

Promoted
Listen to the latest songs, only on JioSaavn.com
Just yesterday, Assam Minister and convenor of the BJP-led North-East Democratic Alliance Himanta Kumar Biswa told NDTV that the North-East could not take in any more refugees.

"We don't want any more migrants, North-East shouldn't be used for further shelter of anybody including Rohingya Muslims," he said, echoing what appears to be the policy of the NDA government for the rest of the country too.