The two were campaigning for a by-election to the Kurhani assembly seat in Bihar. 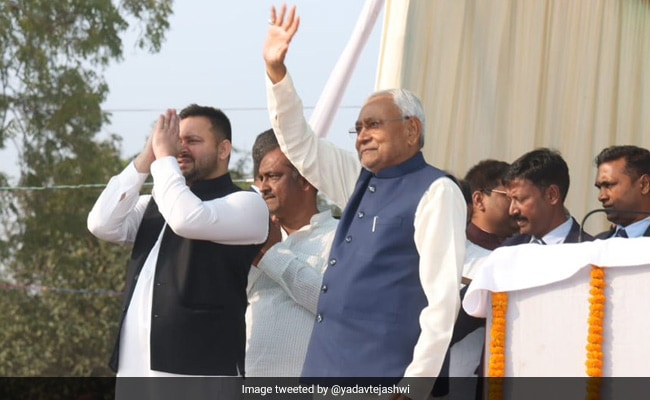 Bihar Chief Minister Nitish Kumar and his deputy Tejashwi Yadav on Friday addressed a joint political rally, the first since the two former rivals patched up nearly four months ago, lashing out at the BJP.

The occasion was the campaign for the by-election to the Kurhani assembly segment, called because of the disqualification of Anil Sahani, the MLA belonging to Mr Yadav's Rashtriya Janata Dal (RJD).

Mr Kumar's Janata Dal (United) or JD(U) has named a candidate to retain the seat for the ruling 'Mahagathbandhan' or Grand Alliance.

"Nothing happens in their camp except prachaar-prasaar (propaganda). They did not agree to our demand for a special status category. Had it been accepted Bihar would have progressed at an even greater speed," said Mr Kumar, adding "I now feel that I am back home (puraani jagah par laut aaye hain). We shall now work together".

The JD(U) leader claimed that the 'Mahagathbandan' government works for all but its efforts do not get "adequate publicity".

"Journalists are told not to report our accomplishments because of pressure from above... Ours is a government that works for all and does not view the society through a divisive prism of Hindu versus Muslim," said Mr Kumar.

Before the rally, there was a brief face-off between 'Mahagathbandhan' supporters and job seekers who are awaiting appointments as teachers with chairs being thrown and the protesters being chased away.

Mr Kumar addressed the demonstration, saying, "I saw some job seekers here holding placards. They seem to have gone away. I want to tell all such people that their grievances would be squarely addressed. We are refraining from making a concrete announcement here because the model code of conduct comes in the way."

Mr Yadav, who spoke before Mr Kumar, tore into the BJP, claiming that the party was "afraid of losing the 2024 battle" even as he sought to draw on the appeal of his father, the RJD's founding president Lalu Prasad Yadav.

"You shall be casting votes on December 5, the day on which Lalu ji will be undergoing a kidney transplant. I am going to Singapore to be by his side. I spoke to him earlier in the day and he wanted to know which way the wind was blowing in Kurhani. I have assured him that the Mahagathbandhan will be winning hands down," the Deputy Chief Minister said.

Mr Yadav said his father has faced court cases and terms in jail and this has taken a toll on his health.

"But he was never afraid of the BJP. The same blood flows in my veins," said Mr Yadav drawing applause.

He also asked people belonging to his community to "beware of attempts by the BJP to create a rift among the Yadavs."

"Stand united in supporting the JD(U) candidate Manoj Singh Kushwaha. Forgive him if he has, in the past, offended you. Ask your womenfolk to remember that in this by-election, the lantern (RJD poll symbol) is with the arrow (JDU's election symbol)," he said.

The JD(U) candidate is locked in a straight contest with BJP's Kedar Gupta. Voting is scheduled on December 5 and results will be out on December 8.