At Congress meet, all eyes on new vice-president Rahul Gandhi 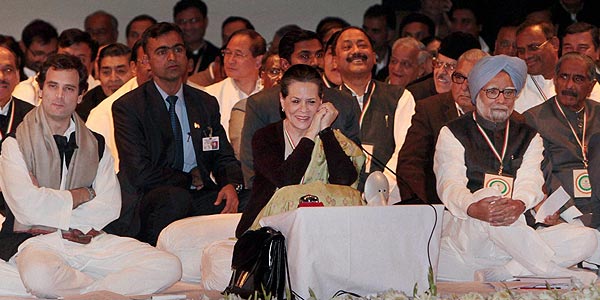 Jaipur: Rahul Gandhi, appointed the Congress' number 2 on Saturday evening, will be the party's show-stopper at an All India Congress Committee or AICC meeting in Jaipur today; he will make his first political speech as the party's Vice-President.

His boss, mother and Congress president Sonia Gandhi spoke at the session this morning on a range of issues, handing to her party its roadmap as it gets battle-ready for Assembly elections in nine states and then the Lok Sabha polls in 2014. "There are only 15 months left for the Lok Sabha polls. I am confident that if we work together, there is no reason that we will not be able to secure a mandate again," Mrs Gandhi said, again identifying corruption as a main issue and asking the party to work with "unity and discipline" for those "who have repeatedly reposed their faith in us."

She also paid touching tribute to the 23-year-old medical student who was gang-raped and murdered in Delhi last month, saying the young woman, "embodied the spirit of an aspirational India. We will ensure her death will not go in vain." The incident, she said, had "shaken the government and the country, people are demanding and rightly so answers from the government...her death will not be in vain. Gender, justice and equality was discussed in the past two days...Our government has taken new steps to ensure welfare and protection of women."

Prime Minister Manmohan Singh will also address the AICC. In traditional Congress style, the big three are seated on the ground on a massive stage, Mr Gandhi to the right of Sonia Gandhi, flanked by many senior Congress leaders. The mood is buoyant and proceedings were delayed for some minutes as excited AICC delegates raised slogans in praise of Rahul Gandhi, who smiled much and raised folded hands in greeting.

The day-long AICC session will wrap up the party's deliberations in Jaipur to devise strategy for the general elections scheduled for 2014; a "Jaipur Declaration" will be adopted by the party at the end of the day today. As the head of the Congress' election committee, Mr Gandhi has charge of leading that strategy when the ruling party asks voters for a third straight shot in power.

Mr Gandhi's appointment as Vice-President was endorsed at the Congress' highest decision-making body, its working committee or the CWC, at the end of a two-day brainstorming session yesterday. Accepting the new role, Mr Gandhi said, "I have great experience...in the last eight years that I have worked with the party. I have seen it is a great organisation and together we will transform the country. It is a great party."

The appointment is expected to galvanise party workers after a series of demoralising electoral setbacks. As the much-awaited announcement of Mr Gandhi finally, and reportedly reluctantly, accepting a "bigger role" was made, Congressmen celebrated with drums, slogans and fireworks. Many Rahul Gandhi posters sprang up overnight in the national capital.

The Congress said Mr Gandhi's promotion represents its commitment to representing the youth of the country. He is 42 and in states like Uttar Pradesh and Bihar, his lead role in elections did not yield any real dividends for the party. He has to reverse that trend quickly. Assembly elections will be held in nine states in 2013, beginning February when three north-eastern states go to the polls. Elections will be held this year in crucial Congress-held states like Rajasthan and Delhi and in states that it hopes to wrest from main rival the BJP, like Karnataka and Madhya Pradesh.

And then will come the big challenge on retaining power in the 2014 Lok Sabha elections. Mr Gandhi's detractors and political rivals are dismissive about the impact of his elevation.

"If they are doing it with the assumption that the fortune of the Congress will shine in 2014, they are entirely mistaken," said BJP spokesperson Ravi Shankar Prasad.

Ally Sharad Pawar refused comment on the appointment saying, "It is an internal matter of the Congress. Every party has the right to make these decisions."

DMK Chief M Karunanidhi, however, congratulated Mr Gandhi, saying, "Your abiding interest in the youth and commitment to advancement of rural areas well known. I'm quite sure that you would take the Congress party to a new height."

In Jaipur, there has been clamour that Rahul Gandhi also be declared the party's candidate for Prime Minister in 2014, but senior party leaders said that would happen later. Congress general secretary Digvijaya Singh pointed out that the party traditionally did not name a candidate for PM before elections and that the new elected members of Parliament picked their leader. "Mrs Gandhi has rightly appointed Rahul Gandhi to the post of vice president. And as far as the prime ministerial post is concerned the party would decide about it later," said minister Sachin Pilot.

The party was quick to emphasise that Mrs Gandhi will continue to play a bigger role. "There is a younger India and we are the first party to include the youth. Sonia Gandhi is the supreme leader and she will help with decisions. She has a bigger role," Congress leader Sandeep Dikshit said.

Promoted
Listen to the latest songs, only on JioSaavn.com
The substantial presence of young delegates at the Jaipur session is seen as a sign of Mr Gandhi's increasing influence on the party. In her speech on Friday, his mother emphasised an urgent need to address an alienation from the urban middle class, especially the youth.

Recently, the Congress responded clumsily when thousands of students protested for weeks against the gang-rape of the young student on a moving bus in Delhi. Demonstrations demanded justice for the victim and better security for women, and there was huge anger at the failure of senior ministers to reach out to the protesters.