24 Lakh Hit In Assam Floods: Images, Videos And All You Need To Know

Assam floods: Over 24 lakh people have been affected according to the Assam State Disaster Management Authority. Crops in 1,09,600 hectares in 24 districts have been damaged. 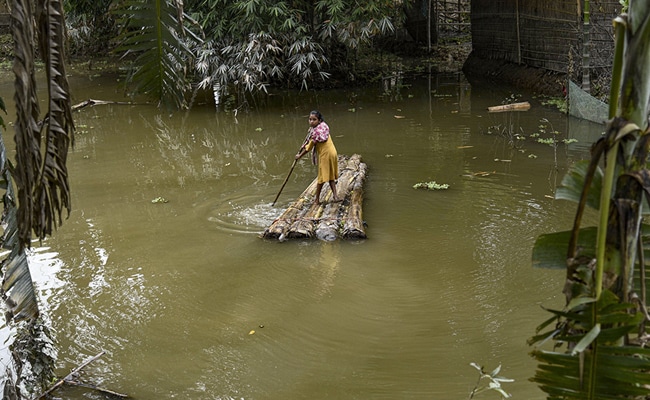 The flood situation in Assam further worsened after heavy downpour for the last four days. Large tracts of land in the state are under flood waters. Assam Chief Minister Sarbananda Sonowal on Monday visited the flood-affected Barpeta district and announced a compensation of Rs 4 lakh, within 48 hours, for the families of those who have lost their lives in the floods.

"This is the third wave of flood in Assam. This is a recurring problem in the state. People are fighting several problems. On one hand, there is COVID-19, and on the other there are floods and landslides," Mr Sonowal said.

Met the affected people and assured all possible support to them. Collaborated operations are in full swing to provide relief to those affected by the #AssamFloods. pic.twitter.com/sPsP5IXEfG

After a day-long whirlwind tour of Barpeta and Nalbari districts, just reached Bongaigaon from Pokhura village, where I reviewed overall flood & #COVID19 scenario of both Bongaigaon & Goalpara districts in presence of senior officials. pic.twitter.com/sOnvzEs2r6

The floods in Assam have affected over 24 lakh people, according to the Assam State Disaster Management Authority. Crops in 1,09,600 hectares in 24 districts have been damaged. The government has set up 276 relief camps and 192 relief distribution centres in the districts to help the flood affected people.

The overflowing Brahmaputra and its tributary Krishnai have severely affected several villages leaving many locals stranded. Teams of the National Disaster Relief Force (NDRF) have been able to reach some of the flood-affected villages.

Around 12 search and rescue teams of the NDRF have been deployed in Jorhat, Bongaigaon, Kamrup Metro, Dhubri, Barpeta, Goalpara, Golaghat, Cachar, Sivasagar, Sonitpur, Dhemaji and Tinsukia. The NDRF control room is also keeping a close watch in other flood-affected areas.

The United Nations has said that it is ready to support flood-hit Assam. "Our humanitarian colleagues tell us that nearly 4 million people have been displaced in Assam in India and neighbouring Nepal due to heavy floods...the UN stands ready to support the Government of India if required," Stephane Dujarric, Spokesman for the world body chief said.