In Bihar, 76.85 lakh people in 12 districts of the state have been hit by the calamity while in Assam 30.55 lakh people are grappling with the deluge. 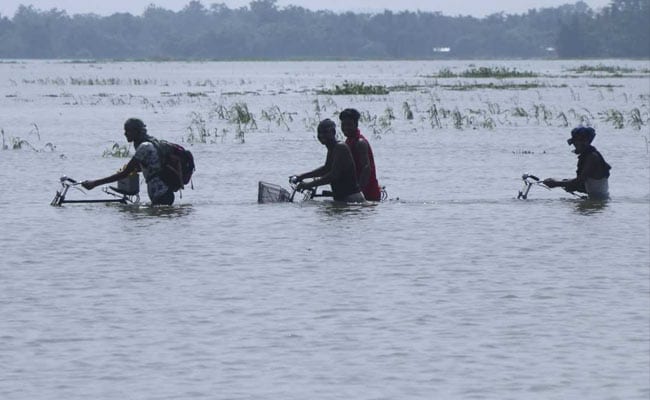 Floods in Bihar and Assam have claimed 170 lives till Monday with 1.07 crore people still reeling under the effect of the deluge in the two states.

In Bihar, 76.85 lakh people in 12 districts of the state have been hit by the calamity while in Assam 30.55 lakh people are grappling with the deluge.

In the northeastern state, the flood has also claimed the lives of 187 animals, including 16 rhinos in the Kaziranga National Park of Assam.

However, in another rhino habitat -- the Pobitora Wildlife Sanctuary -- not a single animal has died in the flood.

Altogether 96,890 displaced persons are sheltered in 757 relief camps and relief distribution centres set up by district administrations, it said.

A total of 2,283 villages and 1.14 lakh hectare agricultural field are still inundated in the flood-hit districts.

The mighty Brahmaputra river is flowing above the danger level at Neamatighat in Jorhat district and Dhubri district, Jia Bharali at N T Road Crossing in Sonitpur district and Kopili at Dharamtul in Nagaon district, the Assam State Disaster Management Authority (ASDMA) said in its evening bulletin said.

In Bihar, though the number of people affected by the flood has increased to 76.85 lakh, the number of relief camps and people taking shelter in camps besides the number of community kitchens has gone down as the water-level is receding, Disaster Management Department officials said.