The Speaker of the Assam Assembly prevented the MLAs from raising an adjournment motion on Citizenship (Amendment) Bill and the final National Register of Citizens. 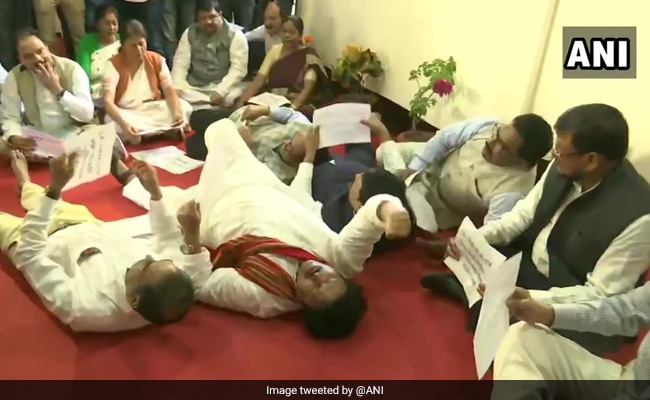 Congress MLAs assemble at the entrance of the House and lie down in the verandah.

The Winter session of the Assam Assembly began on a stormy note today with MLAs of the opposition Congress, protesting the Citizenship (Amendment) Bill and the state government's bid to reject the final National Register of Citizens (NRC), lying down outside the House after being prevented from raising an adjournment motion.

As soon as the House assembled for the session, opposition Congress and AIUDF sought to raise the two contentious issues through an adjournment motion after oaths were administered to four newly-elected MLAs.

When the Speaker did not allow it and asked them to raise the issues after the Question Hour, members of the two parties went to the well of the House, shouting slogans and displaying placards.

Later, they staged a walkout from the House. The Congress MLAs then assembled at the entrance of the House and lay down in the verandah, shouting slogans against the BJP-led government in the state.

The House continued normally without the presence of the opposition MLAs.