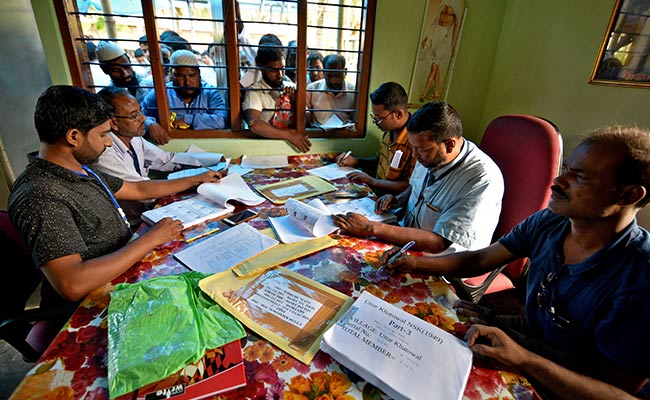 The Supreme Court today told officers handling the Assam citizens' list to be accurate instead of rushing through verifying people to meet the July 31 deadline after which the final list will be published.

The National Register of Citizens or NRC is being updated for the first time since 1951 to account for illegal migration into Assam from neighbouring Bangladesh.

"There are disturbing reports in the media. The media is not always wrong. Reports say how complaints are being dealt with. Hearing of objections has to be done in a proper manner," said a bench of the top court headed by Chief Justice of India Ranjan Gogoi, a day after reports said a retired soldier from Assam, who served in the Army for 30 years, was declared a foreigner by the state police.

The Supreme Court said officers involved in checking documents in the NRC exercise should be "fair" and not "cut short fair hearing".

"Just because the deadline (till July 31) for publishing the (final) NRC list is approaching, it doesn't mean cut short and complete the process. If media reports are to be believed, it is not being done properly. Please ensure proper hearing of objections," said Chief Justice Gogoi said.

Mohammad Sanaulla, 53, who served as a Subedar in the Army till 2017 and fought terrorists in Jammu and Kashmir and Manipur, was arrested on Wednesday and sent to a detention centre. Mohammad Sanaullah was commissioned as a Junior Commissioned Officer in 2014 and made an Honorary Lieutenant.

After his retirement in 2017, he was working as a sub-inspector of the Assam Border Police, which deals specifically with the detection of illegal migrants. The same unit has now accused him of being an illegal resident.

"We are shocked. If this can happen to a retired Indian army personnel... I appeal to PM Modi, he should see the reality of what is happening for NRC," said his son Shahid Akhtar. The family is now preparing for a legal battle to prove that he is Indian.

According to the Assam Accord signed in 1985, anyone who entered the state after 1971 is considered an illegal resident. Rights lawyers say most of those who get penalised are people who come from impoverished families and cannot maintain proper records.

The names of at least 40 lakh people are not on the list and lakhs of them have applied for re-verification.

The latest updation of the list in Assam contains the names of descendants of those whose names were in the 1951 list, or those who were in Assam's Electoral rolls till March 24, 1971. The descendants of those who can prove citizenship till March 24, 1971, will also be considered Indian citizens. So will those who came between January 1, 1966 and March 25, 1971, and registered themselves with the Foreigners Registration Regional Officer.