Mr Nadda's stinging attack on Mr Gehlot came ahead of the Rajasthan Assembly polls which are due in December next year. 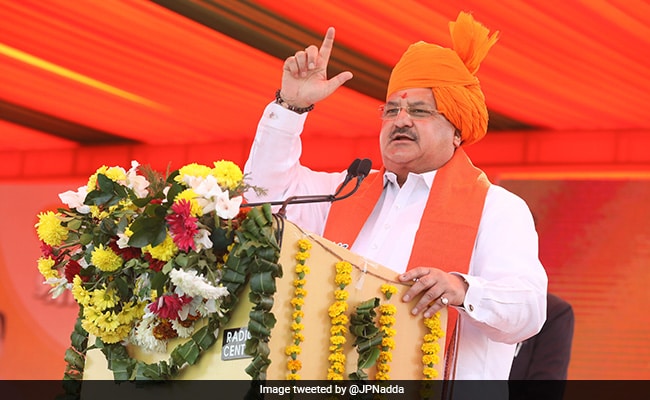 Bharatiya Janata Party (BJP) national President JP Nadda on Thursday said that Chief Minister Ashok Gehlot cares less for the people of the state but more for his party and its leaders.

Mr Nadda's stinging attack on Mr Gehlot came ahead of the Rajasthan Assembly polls which are due in December next year.

Mr Nadda inaugurated the 'Jan Aakrosh Yatra' in Rajasthan's Jaipur in poll-bound Rajasthan and addressed the public of Rajasthan.

While addressing the public during the Jan Aakrosh Yatra, Mr Nadda said," Our 'Jan Aakrosh Yatra' will cover 200 assembly seats and will have Jan Sampark Abhiyan with nearly two crore people. Ashok Gehlot-led Rajasthan government has only changed the names of schemes. Chief Minister Gehlot cares less for the state's people but more for his party and its leaders."

Exuding confidence in the Bharatiya Janata Party (BJP), Mr Nadda said that the Gujarat assembly election, 2022 is going in the favour of the BJP.

"There is immense love for PM Modi in the state. CM Bhupendra Patel has done the work of development in Gujarat. We have seen positive results in today's polling," he added.

Earlier on Thursday, Prime Minister Narendra Modi held a massive roadshow in Ahmedabad in the run-up to the Gujarat Assembly elections.

People flocked on both sides of the streets through which the Prime Minister's convoy was passing. People showered flowers on his convoy. The crowd carrying his posters were chanting "Modi...Modi.." The Prime Minister was also seen greeting people and waving his hands.

After a gap of two days, Prime Minister Modi once again returned to the Gujarat election campaign trail. His three-hour mega roadshow spans 16 assembly constituencies for the second phase of the Assembly election.

The second phase of the Gujarat election would be held on December 5.

The counting of votes will be done on December 8. Results of the Himachal Pradesh Assembly elections will also be declared on the same day.

The Rajasthan assembly election will choose the representatives of all the 200 seats in the state's Legislative Assembly.