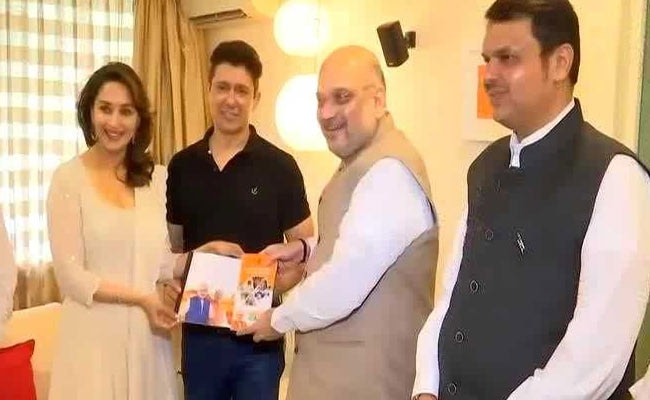 During the meeting that lasted around 40 minutes, the BJP president presented a booklet listing the achievements of the BJP-led central government to the Bollywood star.

Ms Dixit's husband Sriram Nene who is a surgeon was also present during the meeting.

Last month, the BJP had launched a campaign called 'Sampark For Samarthan' (Contact for Support) after the central government led by Prime Minister Narendra Modi completed four years in office.

Nearly 4000 party workers will get in touch with one lakh people who are well-known names in their fields to spread the word about the central government's policies and achievements in the run-up to next year's general elections.

Mr Shah, who is scheduled to meet 50 people as part of the campaign, described his meeting with Madhuri Dixit as pleasant.

It was pleasant meeting the noted bollywood actress @MadhuriDixit and Dr. Shriram Nene as a part of "Sampark For Samarthan" initiative at their home in Mumbai, Maharashtra. Have discussed the achievements and path breaking initiatives of PM @narendramodi govt in last 4 years. pic.twitter.com/slBh5mXAf6

Later in the day, the BJP chief met Ratan Tata, the chairman emeritus of Tata Sons, at his Colaba residence.

Met Shri @RNTata2000 ji as part of "Sampark For Samarthan" campaign. I took him through Modi government's development achievements and initiatives. It was nice meeting him and greatly value our conversation. pic.twitter.com/IeT07DmK2A

Mr Shah was also scheduled to call on legendary singer Lata Mangeshkar but that meeting could not happen as she is unwell.

Promoted
Listen to the latest songs, only on JioSaavn.com
"I spoke to Mr Amit Shah over the phone and expressed my inability to meet him as I am down with food poisoning. I have requested a meeting with him the next time he is in Mumbai," tweeted Lata Mangeshkar.