The infant's safety, and that of her mother, came down to a determined grandmother, who said she rowed the two to safety, and provided food

At least two lakh people are in relief camps, with more than 30 lakh affected

In an Assam ravaged by floods, an infant girl has been shuttled between her home in Jamguri village and a relief camp in Amdah in Barpeta district, which is only 130 km from Guwahati, twice in a fortnight. Barely a month old, she will have no memory of the trips, but her plight highlights the trauma her fellow Assamese have faced these past weeks.

The infant's safety, and that of her mother, came down to a determined grandmother, who said she rowed the two to safety, and provided food.

"With this month-year-old child we were stuck in our home for three days. Flood waters entered out house. We kept the child on a cot. As water levels went up, I rowed the child and mother to safety in a banana trunk. I had to ensure that (the) mother gets food... else how will the child survive," Kanika Goyari, the child's grandmother, said.

A second wave of flash floods hit the state yesterday, taking the death toll across Assam to nearly 80. At least two lakh people are in relief camps, with more than 30 lakh affected, and 18 districts are inundated.

The floods were a result of three days of heavy rain that resulted in a river in neighbouring Bhutan flowing above danger levels. Water released from that river flowed directly into lower Assam districts.

Barpeta, the worst-hit district, has spent the last three weeks battling floods. Relief camps, including the one Kanika Goyari and her granddaughter returned to, are bursting at their seams, and there are many in the camps who still don't know what happened to their families. 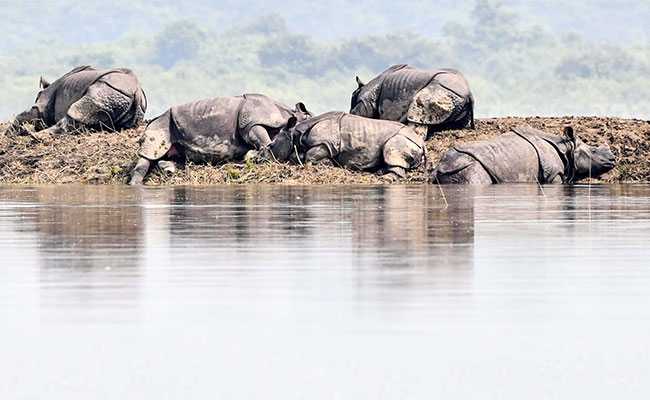 The floods have killed more than 200 animals, including 16 endangered rhinos

Anima Swargoyari, 60, has had no news of her husband, who bravely stayed back to save their house, for three days now.

"Now this has happened for a second time. With the flood water engulfing the entire village by 12 at night, we had no choice but to look for boats. But it's not easy for poor people like us to leave house, it's our only asset and that's why my husband stayed back to protect the house now I can't reach him," she explained tearfully.

In fact, several people hit by these floods have been loath to leave their homes, choosing instead to camp on nearby high ground.

"In 2004, we witnessed similar floods and after so many years we are once again on the roads under tarpaulins sheets. This, for the past two days, is home for me. Across Barpeta you will find several like me for whom the road is now home," Ratikanta Das, 77, said.

Meanwhile, Nabajit Goyari, 11, is worried about his studies; his books were washed away.

"All my books have been washed away in front of my eyes as flood waters almost got us drowned and my parents are too poor to buy me booms once again as they have to take care of my mailing grandfather," he told NDTV.

The floods have also killed more than 200 animals, including 16 endangered rhinos in Kaziranga National Park.