A total of 826 relief camps are operational in various districts of Assam in which around two lakh people are lodged.

People carry their belongings on a makeshift raft in Barpeta, Assam. (PTI Photo)

Following the death of six more people in Assam floods in a day, the death toll in the state has risen to 75. According to officials, flood waters have inundated 20 of 33 districts in the state, affecting more than 34 lakh people. Around 3,000 villages remain inundated.

An alert has been issued for lower Assam since Bhutan is expected to release water from its dams due to an over-flooded river. The water will flow directly into lower Assam districts. More teams of the National Disaster Response Force have been rushed to the lower Assam region, while the army has been put on stand-by. 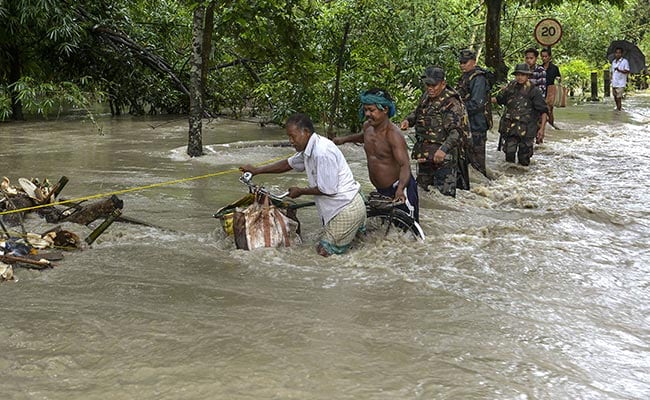 Assam finance minister Himanta Biswa Sarma reviewed the ongoing flood situation in Assam today. He said a total of 30 embankments have breached during the current wave of floods in the state.

He said the Public Works Department has suffered a major loss estimated to be Rs 350 crore so far.

The minister said different departments have sought about Rs 1,000 crore to meet the damages caused by the floods.

A total of 826 relief camps are operational in the districts of Baksa, Nalbari, Barpeta, Chirang, Bongaigaon, Kokrajhar, Dhubri, Goalpara, Kamrup, Morigaon, Nagaon, Golaghat and Jorhat. Around two lakh people have been shifted to these relief camps.

Water levels in rivers continue to flow at the 'danger level' in several parts in the state, including Brahmaputra at Neamatighat (Jorhat) and Dhubri, Jia Bharali at NT Road Xing (Sonitpur), Manas at NH Road, Xing (Barpeta) and Sonkosh at Golakganj (Dhubri), officials said.

Floods have also killed over 200 animals, including 16 endangered rhinos in Kaziranga National Park.