Three more children suffering from Acute Encephalitis Syndrome died in Muzaffarpur since yesterday evening, taking the total number of deaths caused due to the outbreak to 118. 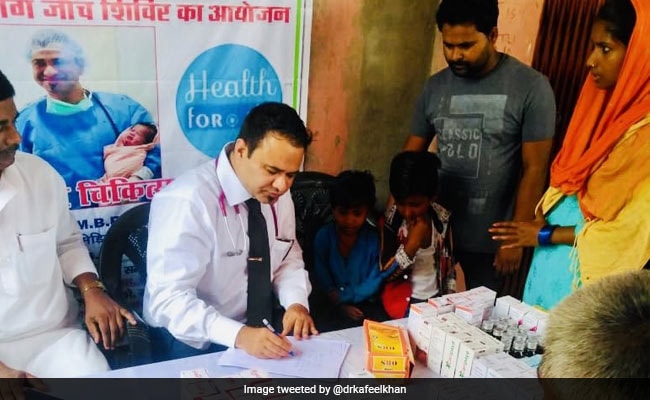 Dr Kafeel Khan has set up a camp in Muzaffarpur to offer free medical care to patients.

Uttar Pradesh-based pediatrician Kafeel Khan, who was suspended last year following the deaths of a large number of Japanese encephalitis-afflicted children at a hospital in Gorakhpur, has reached Muzaffarpur to volunteer his service amid the Acute Encephalitis Syndrome (AES) outbreak that has led to the death of 118 children in  the north Bihar town.

The doctor, who has been running a "health for all" campaign after being released on bail by the Allahabad High Court, has set up a camp in the town's Damodarpur locality to offer free medical care to patients. His twitter feed is also abuzz with videos aimed at spreading awareness about the symptoms of brain fever.

"More than 300 kids were examined and given free medication at Damodarpur in Bihar's Muzaffarpur Encephalitis (chamki bimari) screening camp. Parents were told about the symptoms /prevention from the diseases and along with instructions what to do if the child showed symptoms of encephalitis (sic)," Dr Khan said on micro-blogging site Twitter.

"The cause for children's deaths is more because of mismanagement than the disease. How will one doctor handle four ICUs?" he said in another tweet.

Three more children suffering from Acute Encephalitis Syndrome died in Muzaffarpur since yesterday evening, taking the total number of deaths caused due to the outbreak to 118, the district administration said today.

While two deaths were reported from the Sri Krishna Medical College and Hospital (SKMCH) -- raising the number of deaths at the government healthcare facility to 97 -- another child died at privately-owned Kejriwal hospital, where the total number of casualties has reached 20.

One death was reported from East Champaran district two days ago.

The total number of AES cases registered since June 1 was 398 at the SKMCH and 154 at Kejriwal hospital, according to figures provided by the district administration.

Bihar Chief Minister Nitish Kumar -- who had visited the town on Tuesday and issued elaborate instructions to tackle the situation -- is scheduled to hold a high-level meeting in Gaya later in the day.

The meeting is likely to take place after an "aerial survey" of Nawada, Aurangabad and Gaya districts, which have been reeling under an intense heat wave that has claimed more than 80 lives in the state so far.

At the meeting, the chief minister will review the measures taken for protecting the people from the heat wave and brain fever, and evaluate the steps initiated for the prevention of Japanese encephalitis (JE) outbreak, which has been reported from several central Bihar districts in the past.

According to experts, unlike JE, AES is not caused by a viral infection but by malnutrition and a toxin found in unripe litchis, which is said to trigger hypoglycemia or very low blood sugar levels.