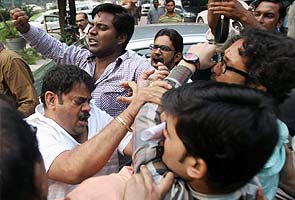 New Delhi: India Against Corruption (IAC) today claimed that a man who threw a shoe at Arvind Kejriwal two days ago is close to Gandhi family.

Releasing photographs of Jagdish Sharma with Sonia Gandhi and Robert Vadra, the IAC said, "He seems to be a close aide of Gandhi family. Has the Nehru-Gandhi family descended to Khurshid's level where they would send goons to disrupt our meeting? In such circumstances, any attack on IAC activists would have to be presumed to be at the behest of Congress if unless the contrary is proved," an IAC statement said.

Mr Sharma and two others had disrupted a press conference of Mr Kejriwal and Prashant Bhushan on October 31.

MR Sharma, on his part, admitted that he staged the protest at Mr Kejriwal's press conference but said he was not close to the Gandhi family.

"There are many pictures of many workers like the one which has been shown. This does not mean that they had asked me to carry out. This was my own reaction as a common man. I hurled a shoe at Mr Kejriwal because he has tarnished the image of country in front of the whole world. I am a worker of Congress but not a leader," Mr Sharma said.
Comments
Arvind Kejriwal