The students have been protesting outside the SSC office at the CGO complex in Lodhi Road in south Delhi for the last four days, seeking a CBI probe into the alleged paper leak in the Combined Graduate-Level (CGL) examination held from February 17 to 21. 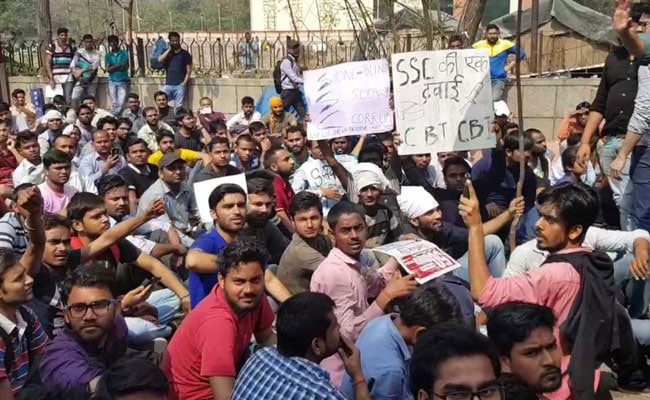 New Delhi: Delhi Chief Minister Arvind Kejriwal has demanded an inquiry by the Central Bureau of Investigation into an alleged scam in an examination by the Staff Selection Committee or SSC for government jobs, stating the issue is related to the fate of thousands of exam aspirants.

"Thousands of aspirants are demanding a CBI inquiry into the SSC exam scam. This issue is related to their future. The central government should immediately accept the aspirants' demand and order a CBI inquiry," Mr Kejriwal tweeted on Friday.

The students have been protesting outside the SSC office at the CGO complex in Lodhi Road in south Delhi for the last four days, seeking a CBI probe into the alleged paper leak in the Combined Graduate-Level (CGL) examination held from February 17 to 21.

Yesterday, the Congress and Swaraj India president Yogendra Yadav too had backed the protesting students and asked for a CBI probe.

Equating the alleged scam to the Vyapam scam in Madhya Pradesh, Congress spokesperson Randeep Singh Surjewala tweeted to say that Prime Minister Narendra Modi and the SSC are not speaking up when the future of millions of youth is jeopardised.

"#sscscam SSC Scam is another #Vyapam. Jobs being sold, future of millions of youth jeopardised, unabated protests continue for 3 days in Delhi, yet Modiji & SSC remain mum. If there is nothing wrong, why no CBI probe? Will PM answer? Will media listen? (sic)" Mr Surjewala had tweeted on Thursday.

His party colleague Shashi Tharoor even wrote to union minister Jitendra Singh on the matter. "With lakhs of protesters clamouring for justice it is clear that SSC CLG Mains 2018 must be scrapped and rescheduled. A CBI inquiry into the leak is imperative. Our nation cannot afford to shake the faith of our students in the competitive examination system," he later tweeted.

Yogendra Yadav had said that there were rumours of police action on students protesting outside the SSC office.

"The information coming out indicated towards a scam of massive proportion. The demand for a fair and independent CBI probe is absolutely right," Swaraj India said in a statement quoting Mr Yadav.

The SSC, responding to demands of a CBI probe, has said it would only do so if the evidence provided by the candidates is found substantiated.