Arvind Kejriwal Calls Himself 'Baniya', Woos Traders Ahead of Polls 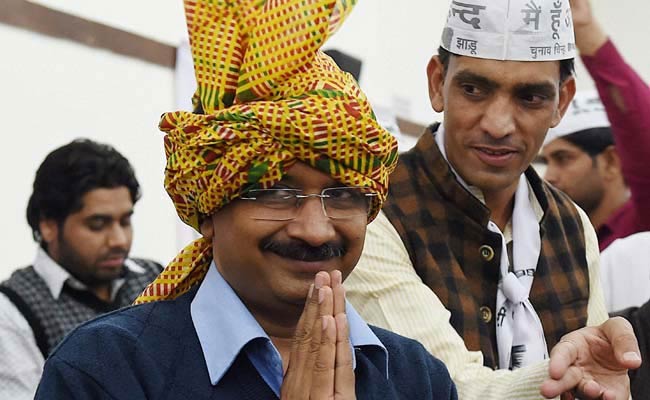 New Delhi: Describing himself a "baniya" who understands business, AAP chief Arvind Kejriwal today sought to woo the traders community ahead of the Assembly polls, by promising to restructure the tax regime in Delhi and to put an end to "extortion and raid racket" by the VAT department.

Addressing a traders rally, at the bustling Nehru Place here, Mr Kejriwal announced a slew of measures for them, saying if voted to power, his party will create a business-friendly environment and make Delhi a wholesale and distribution hub in the country.

The AAP leader described himself a trader, and said he understood the "dhandha".
"I am from the trader community and I understand the trade (mayn baniya hun aur dhandha samjhta hun)," Mr Kejriwal said, adding, "We want you to do your business with full honesty and pay taxes."

"There will be minimum interference from the government. Our party's policy is not to indulge in raids, but trust the traders. Our government will see the end of VAT raids and extortion racket and create a business-friendly environment," he said.

The former Delhi chief minister recalled his short-lived regime and alleged that soon after his departure, traders were "harassed" by the VAT department.

"This is what we did during our 49-day rule. Traders were never harassed during our rule. In fact, the VAT collection during our regime was the highest, but declined soon after we resigned, which was followed by raids," Mr Kejriwal claimed.

He also assured to restructure the tax regime in Delhi to help boost business and said the party will have a "single- window" clearance system for those wanting to open businesses in Delhi.

He added that there will be an easy tax filing and assessment with well-defined and streamlined procedure.

Mr Kejriwal promised that all transactions would be made online to reduce the interface with Delhi government. Licences can be applied for and received at home, which will reduce the avenues and opportunities for corruption.

"Trade is hampered due to red tape and bureaucracy. If anyone wants to open a business in Delhi, he will get all the necessary permissions in seven days. If that is delayed then he can come to the chief minister's office and take his permission.

"In next five years, we will have the lowest VAT in the country. 30 pages of VAT forms will be made into one simple page for traders. This will help create a business-friendly environment in Delhi. If that happens business will increase and will create jobs. Reduction of VAT will also help in bringing down the costs and thus reduce inflation," Mr Kejriwal said.

Mr Kejriwal also mooted the concept of using one portion of the VAT from every locality and market for the maintenance and upgrading of that market to foster future business and trade.

He said no policy on traders would be formulated without any involvement of traders.
To give a boost to the existing industrial areas of Delhi, the former Delhi chief minister promised to provide better facilities like roads, water and electricity in Delhi's industrial areas.

Promoted
Listen to the latest songs, only on JioSaavn.com
Reiterating his party's stand on opposition to FDI in retail, Mr Kejriwal said that this "does not generate much employment, but on the other hand kills the small traders."

After some traders raised the issue of e-commerce websites, Mr Kejriwal said, "If someone is selling product, which costs Rs 20 at Rs 18, then there is some problem there. We are not against e-shopping websites, but we will certainly investigate the matter if we find something fishy."