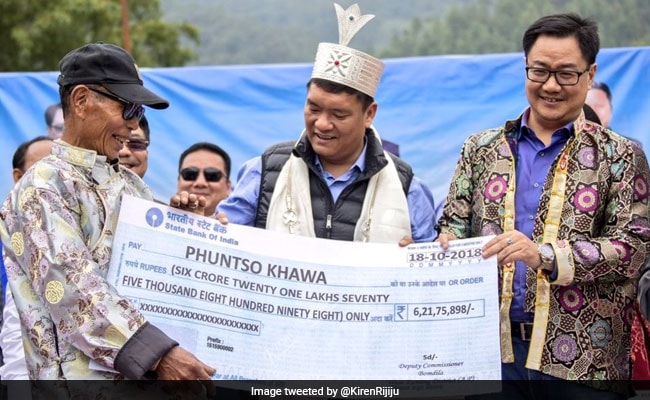 More than 56 years after India's war with China, villagers of Arunachal Pradesh have received nearly Rs. 38 crore as compensation for the land acquired by the Army to set up its bases, bunkers and barracks.

At a special function the Union Minister of State for Home Kiren Rijiju and Arunachal Pradesh Chief Minister Pema Khandu distributed the cheques to the villagers of West Kameng district on Friday.

"A total of Rs. 37.73 crore has been given to the villagers. Those were community land. So the huge amount they received will be distributed amongst the villagers," Mr Rijiju told PTI.

After the 1962 India-China war, the Army had acquired huge tracks of land to set up its bases, bunkers, barracks, construct roads, build bridges and other installations.However, no compensation was given to the land owners till last year.

Mr Rijiju, who hails from Arunachal Pradesh, had persuaded with the Defence Ministry and got the compensation amounts sanctioned.

"Lands acquired by the Army were done in national interest, but no government has bothered to pay the compensation to the villagers of Arunachal Pradesh since the 1960s. I am thankful to Prime Minister Narendra Modi and Defence Minister Nirmala Sitharaman for clearing it finally. Total cheques of Rs 37.73 crore were handed over," he said.

As Farmers Led By Congress Try To Enter Haryana, Cops Use Water Cannons