Read inOther Languages
This Article is From Aug 24, 2019

LK Advani said that Arun Jaitley was known and respected for his "sharp, analytical mind". 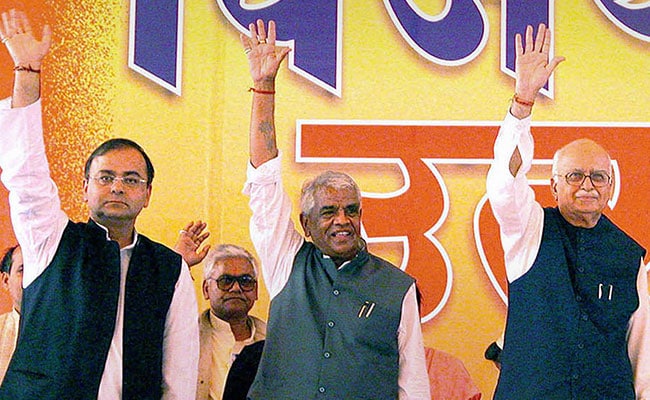 Arun Jaitley (left) and LK Advani (right) at a rally in 2004 in Madhya Pradesh.

Arun Jaitley was a man with a deeply analytical mind who helped the BJP find solutions to complex issues, party veteran LK Advani said on Saturday, paying his tributes to the former Finance Minister who died at Delhi's All India Institute of Medical Sciences (AIIMS) hospital where he was undergoing treatment for a few weeks.

"I am deeply saddened to condole the passing away of yet another close colleague Arun Jaitley ji. Besides being a big luminary in the legal arena, Arun ji was an outstanding parliamentarian and a great administrator," Mr Advani said.

"A dedicated party worker for decades, he was someone who was inducted into the BJP core team when I was party president and he soon rose to become one of the most prominent leaders of the party," he said in a statement.

The senior leader also said that Arun Jaitley was known and respected for his "sharp, analytical mind and everyone in the BJP always depended on him for finding solutions to complex issues."

"He was also someone who valued and nurtured his friendship with people across the political spectrum. As a person, Arun ji will be remembered as a soft-spoken, erudite and warm-hearted person. A food lover, he never failed to recommend good restaurants to me. Also on every Deepawali, he made it a point to come with his family to our home to wish us," LK Advani said.

"Although Arun ji was hospitalised for the last couple of weeks, we were all hoping that he would recover soon," he said.

Terming his death as a "huge loss" not only to the BJP and the entire Sangh Parivar, but also to the nation, Mr Advani said that it was a "personal loss that has left a huge void" in him.