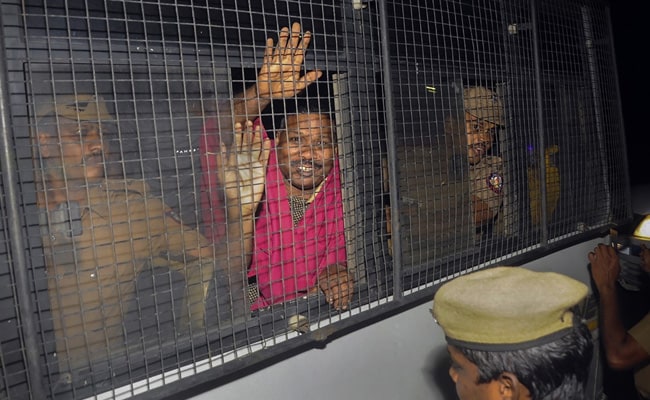 Following an 'information' that the four life convicts freed in the Rajiv Gandhi assassination case, now lodged in a camp here, would be resorting to a hunger strike over basic amenities, a top official visited the premises on Monday.

Speaking to reporters after inspecting the Special Camp, Tiruchirappalli district Collector M Pradeep Kumar said that issues related to basic amenities in respect of the four inmates have been addressed. All necessary arrangements are in place for their stay, he said.

The four Rajiv case convicts --Sriharan alias Murugan, Santhan, Robert Payas and Jayakumar-- after release from separate prisons in Tamil Nadu were lodged in the Special Camp on the night of November 12. All the four are Sri Lankan nationals.

The Collector said that there was an 'information' that the four inmates may go on a hunger strike in connection with amenities.

However, it was not so and two of the four inmates, Robert Payas and Jayakumar, requested space to go for a walk. It would be done soon and hence the four inmates "are not going to go on a fast," he said.

There is no bar on family members or relatives visiting them after getting prior permission from the official in-charge of the special camp, he said. Arrangements have been made to provide food as well to the four freed convicts, he said.

Sriharan's wife, Nalini, also one of the six freed convicts met him in the camp on Monday. She is an Indian. The camp is a secure facility to house foreign nationals till their deportation. They are lodged here under specific circumstances, which includes them being granted bail or if freed by courts.

Camp inmates are allowed to cook their own food. However, mobile phones or gadgets are not allowed inside the camp premises. There are over a 100 inmates in the camp, a chunk of them being Sri Lankan nationals.