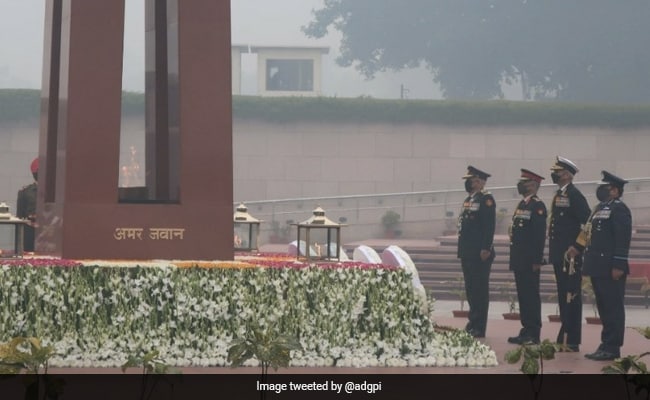 On the occasion of the 73rd Army Day, Chief of Defence Staff, General Bipin Rawat paid tribute at the National War Memorial in Delhi on Friday. Along with General Bipin Rawat, the chiefs of all three Armed Forces, Army chief General Manoj Mukund Naravane, Air Force chief Air Chief Marshal RKS Bhadauria and Chief of the Naval Staff Admiral Karambir Singh paid tribute at the war memorial. The Indian Army also paid homage to the hundred soldiers who died in the line of duty in 2020.

"Army pays homage to the 100 battle casualties in the year 2020 on the Army Day today. These officers and jawans lost their lives in different operations including the Galwan valley clash in Eastern Ladakh on June 15," the Army said in a tweet.

Army Day is observed every year on January 15 to celebrate Field Marshal KM Cariappa taking over as the first Indian Commander-in-Chief of the Indian Army in 1949.