The drive was part of "Swachhta Pakhwada" which is being observed at Army Base camp at Siachen from December 1 to December 15. 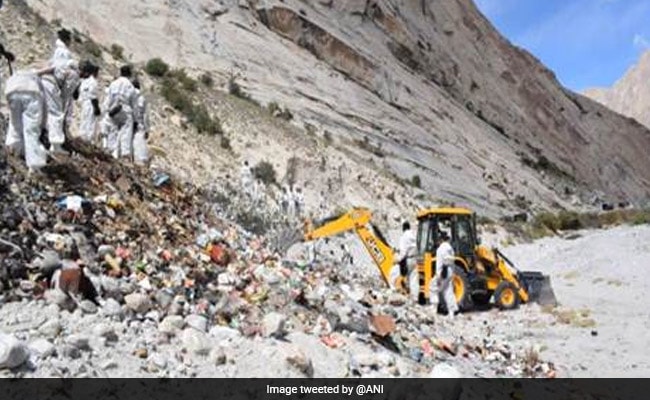 40.32 tonnes of non-biodegradable non-metallic waste has been cleared from Siachen

Troops participated in a "special plogging awareness drive" in Siachen and collected a large number of waste for incineration.

"We undertook plogging in Siachen glacier to collect plastic and waste garbage," a senior officer said.

Later, the garbage and plastic waste was segregated and incinerated in a fuel-less incinerator, he said, adding the collection from incinerator was used in greenhouse maintained by Siachen brigade.

Army officials said incinerators have been installed at Partapur near Siachen base camp and Bukdang in Leh to convert non-metallic waste into manure. The Army has also set up cardboard recycling machines in Leh.

The drive was part of "Swachhta Pakhwada" which is being observed at Army Base camp at Siachen from December 1 to December 15.

The aim of the exercise is to raise awareness in the society to collect plastic waste and make the surroundings clean, the officer said.

The slogan for this event is "Plastic Se Raksha - Swachhata Hi Suraksha".

Presence of sizeable number of troops saddled the glacier with tonnes of waste and the Army is determined to rid the area of pollutants, the Army officials said.

The Siachen glacier at the height of around 12,000 ft in the Karakoram range is known as the highest militarised zone in the world where the soldiers have to battle frostbite and high winds.

According to official figures, the Army has lost 163 personnel at the world's highest battlefield during the last 10 years.

India and Pakistan started deploying troops at the strategically key glacier in 1984.