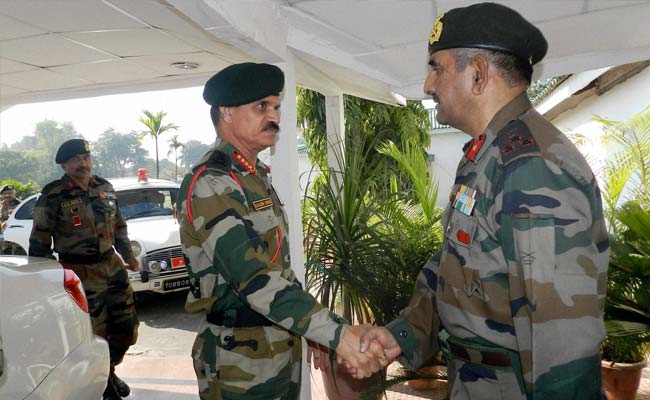 Army chief General Dalbir Singh Suhag being received in Guwahati, where is undertaking a review of operations against Bodo militants. (Press Trust of India)

Guwahati: Indian Army chief General Dalbir Singh Suhag on Saturday reviewed the security situation in Assam in the aftermath of the gory killings by Bodo militants, as security forces intensified operations along the international border with Bhutan.

The Army chief said he would continue to maintain a close watch on the region.

An Army spokesman said General Suhag headed to the Army base in Rangia straight from the Guwahati airport and reviewed the security situation with top commanders.

He was given an overview of the current status of operations, including the various measures taken to improve the larger security situation in Assam.

The General reviewed the deployment of 66 Army columns in the disturbed areas, after violence unleashed by Bodo militants left 73 people dead and rendered over 70,000 homeless in the four districts of Kokrajhar, Chirang, Sonitpur and Udalguri.

"He was briefed on the proactive actions undertaken by the Army along with different agencies to intensify the pressure against the militant outfits," a Defence spokesperson said in a statement.

The Army chief interacted with various commanders in the field to obtain a first-hand perspective of the operations, and also undertook an aerial reconnaissance of the strife-torn areas.

The Army chief expressed satisfaction over the steps taken at all levels, and asked for greater synergy with the central and state intelligence and security agencies, the statement said.

"The General also took note of the road map being planned by the Army, jointly with police, and directed his troops to extend all possible support to the state administration in restoring normalcy, while at the same time carrying out relentless operations against the perpetrators of terror," the statement added.

The Army has already intensified operations along the Assam - Arunachal Pradesh inter-state border and along the international border with Bhutan in the aftermath of the massacre by the National Democratic Front of Bodoland (NDFB).

The central government has already sent 50 companies of additional forces including those from the Sashastra Seema Bal, Indo-Tibetan Border Police, Central Reserve Police Force and Border Security Force to control the situation.

Although there has been no fresh incident of violence since Tuesday's killings, the exodus of people continued in the affected districts.

Assam Police sources said the Bhutan border has been sealed and a special operation might be launched soon against militants from the northeast hiding there.

Promoted
Listen to the latest songs, only on JioSaavn.com
The State Disaster Management Authority said over 70,000 people have taken shelter in 77 relief camps in the affected districts.