The Army Chief heaped praise for the troops who carried out the operation against terrorists hiding in a truck laden with apples. 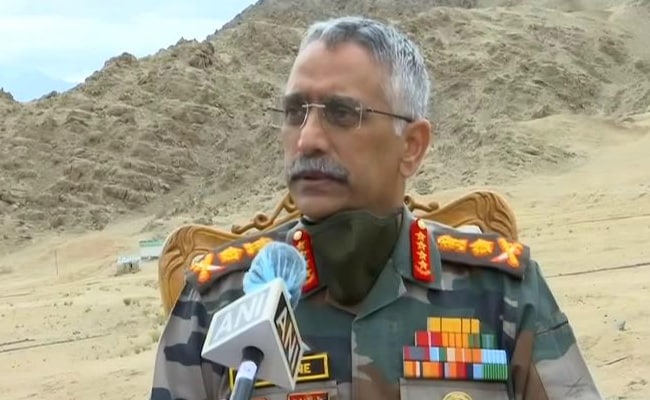 Army Chief was asked to comment on the operation in Nagrota in which four terrorists were killed. (File)

After the successful operation by security forces to eliminate four terrorists in Nagrota on Thursday, Army Chief General Manoj Mukund Naravane said that the message was very clear for Pakistan and its terrorists that whosoever crosses the Line of Control to infiltrate into India would be dealt with in the same manner and would not be able to go back.

The Army Chief heaped praise for the troops who carried out the operation against terrorists hiding in a truck laden with apples. He said that there was a great deal of synergy between the Army, Jammu and Kashmir Police and paramilitary troops deployed there.

"The message is very clear for the adversary and terrorists that whosoever tries to infiltrate towards our side would be dealt in the same manner and they would not be able to go back," he added.

The Army Chief was asked to comment on the operation in Nagrota in which four terrorists were killed. The four terrorists are suspected to be members of the Jaish-e-Mohammed.

Security forces including the Central Reserve Police Force (CRPF) along with the Special Operations Group of Jammu and Kashmir Police and Army were put on alert after receiving information regarding a suspicious truck carrying terrorists.

Following this, an encounter broke out between the troops and terrorists at 4.20 AM when the truck was attempted to be stopped near the toll plaza.

After the four terrorists were killed during the encounter, 11 AK-47s rifles, 3 pistols, 29 grenades, and other devices were recovered from them. It seems they had infiltrated with the intention of doing something big and were headed towards Kashmir valley.

A significant quantity of Pakistan-made medicines was recovered from the possession of four terrorists who were neutralised in Jammu's Nagrota on Thursday, sources said.

The encounter between terrorists and security forces broke out in the early hours of Thursday near Ban Toll Plaza in the Nagrota area of Jammu district. The encounter lasted for three hours.