The Congress said the delegation was never authorized by the party and that "the party's position is clear -- Kashmir is an integral part of India and an internal matter of the country."

Jeremy Corbyn, who is leader of Opposition since 2015, tweeted a photo with the Congress delegation

UK Opposition Labour Party leader Jeremy Corbyn's tweet on a "very productive meeting" with UK representatives of the Congress and a discussion with them on Kashmir has fueled a political firestorm, with the ruling BJP calling it "appalling" and demanding an explanation.

"Appalling! (Congress) owes it to the people of India to explain what its leaders are telling foreign leaders about India. India will give a befitting reply to Congress for these shameful shenanigans," tweeted the BJP on Jeremy Corbyn's controversial post.

The Labour Party leader tweeted a photo with the Congress delegation and wrote: "A very productive meeting with UK representatives from the Indian Congress Party where we discussed the human rights situation in Kashmir. There must be a de-escalation and an end to the cycle of violence and fear which has plagued the region for so long."

Prominent in the photo is Kamal Dhaliwal, who is the Congress president of the UK wing. He is believed to be close to Rahul Gandhi - one photo shows the former Congress president feeding him cake -- and has been photographed with various Congress leaders. 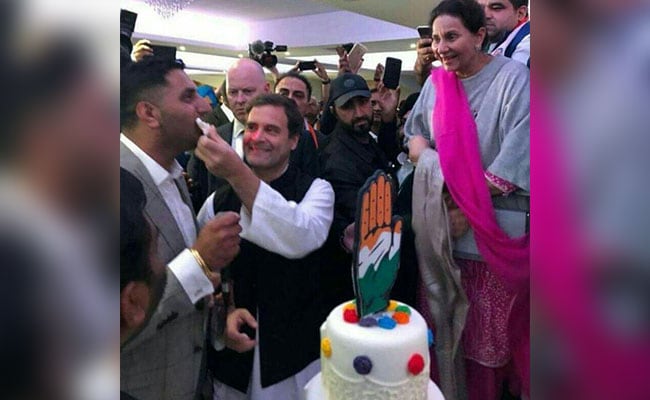 Rahul Gandhi seen feeding cake to Kamal Dhaliwal, who is the Congress president of the UK wing

"We are shocked by this misrepresentation. Any issue pertaining to Jammu and Kashmir are purely India's internal affairs," Congress leader Anand Sharma said.

"We disown any such claim in entirety. I am conveying this to the leadership of the Labour Party and to Barry Gardener, who heads the foreign affairs department of Labour Party to convey this to Jeremy Corbyn," Mr Sharma said.

The tweet has embarrassed the Congress, given that the Labour Party is seen as a critic of the government's move to end special status to Jammu and Kashmir under Article 370 and the security and communication restrictions that followed that decision. Corbyn has been under pressure from the Indian diaspora in Britain - specifically Labour Friends of India, the representative diaspora group of the Labour Party -- over the party's resolution against the Kashmir decision at its conference last month.

Soon, the UK Congress wing sought to clarify in its tweet that it had met Corbyn to reiterate that Jammu and Kashmir is an internal matter and no intervention will be accepted. "Our meeting with Jeremy Corbyn was held to condemn the Kashmir resolution passed by his party and to reiterate that J&K is an internal matter and outside intervention will not be accepted. BJP's malicious statements are another attempt to distract people from their failures," the Indian Overseas Congress tweeted.

In Delhi, the Congress said the delegation was never authorised by the party and that "the party's position is clear -- Kashmir is an integral part of India and an internal matter of the country."

The Congress is reportedly trying to identify the people in the photo.

India has been firm on its stand that its move on Kashmir is an internal matter and no third party has any role in it.