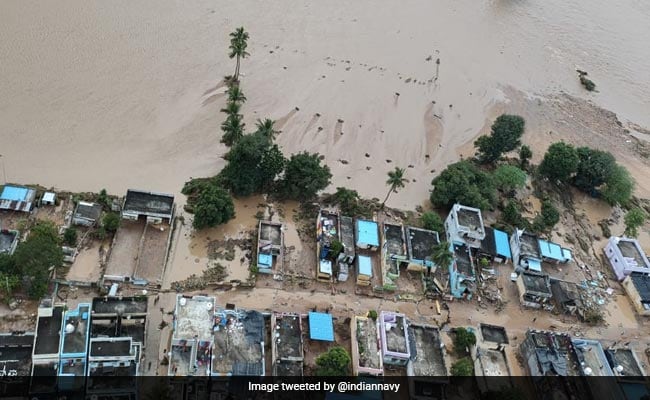 At least 40 people died and 25 others were reported missing in Andhra Pradesh floods. (File)

"Despite arranging teams well in advance and serious efforts by the government to save the lives of people, 40, including a State Disaster Response Force constable, died and 25 others were reported missing. As many as 324 relief camps have been arranged, accommodating 69,616 persons in the affected districts and they are still continuing," the Chief Minister said.

"The worst affected were the farmers as crops (like paddy, Bengal gram, cotton, black gram, groundnut and sugarcane) ready for harvesting were damaged," Mr Reddy added.

Roads and irrigation systems were the worst hit, with the deluge causing a loss of Rs 1,756.43 crore and Rs 556.96 crore respectively, the chief minister said in the letter.

"Heavy rains caused inundation of low-lying areas and disrupted normal life. The gravity was such that 17 teams of NDRF and SDRF and two helicopters had to be deployed for undertaking search and rescue operations. In all, 1,402 villages in 196 mandals and four towns were affected," he added.

He requested the centre to "come to the rescue of the state" in this hour of crisis and immediately release Rs 1,000 crore as interim relief to help the affected families and restore normalcy by undertaking repairs to infrastructure.

The chief minister also requested that an Inter-Ministerial Central Team be sent to the state to assess the damages.