The students and activists had gathered at the Gateway of India on the intervening night of Sunday and Monday, soon after the reports of violence in JNU became public. 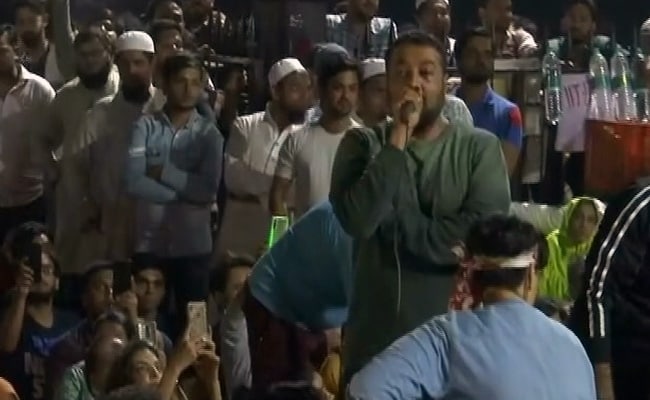 Filmmaker Anurag Kashyap said that he was at the protest site to show his solidarity with students.

Filmmaker Anurag Kashyap and lyricist Vishal Dadlani joined the ongoing protests being organised by students at the Gateway of India against the violence in Jawaharlal Nehru University (JNU) campus on January 5.

"I watched the protests which were going on here and decided to join the students. The government does not want to arrest the perpetrators because they are their own people. The police did not enter JNU to stop the violence but entered the Jamia Millia Islamia where they beat up the students," Mr Kashyap told reporters on Monday night.

"We are here in support of a secular India, there is no other motive behind me joining this protest. One India for all," Mr Dadlani told reporters.

Scores of students have continued their protest at the Gateway of India in Mumbai on Monday against the violence which broke out at the campus of Jawaharlal Nehru University (JNU) in New Delhi on January 5.

The students who are from different colleges were sloganeering against the Central government and are exhibiting solidarity with the JNU students injured in Sunday's violence.

The students and activists had gathered here on the intervening night of Sunday and Monday, soon after the reports of violence in JNU became public.

Placards with "We stand with JNU", "Stop attacks on students" written on them were also seen at the Gateway of India.

Politicians, cutting across party lines, had condemned the attack on students which had taken place in JNU on Sunday. They had urged the administration to take nab the culprits and take strict action against those found guilty.

More than 30 students have been taken to the AIIMS Trauma Centre after a masked mob entered the JNU and attacked them and professors with sticks and rods.