Three INSAS rifles, that were stolen on August 15 by a group of masked people from a police vehicle, were recovered from the Umkhrah river by a team of Meghalaya Fire and Emergency Services. 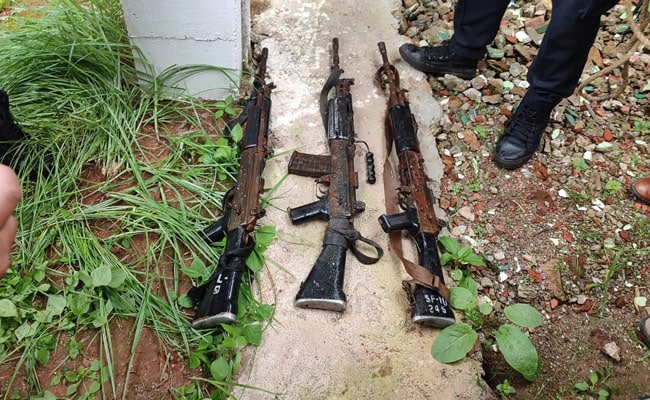 An anonymous letter has helped the officials in Meghalaya recover the weapons which were stolen from the police during the Independence Day chaos after violence broke out in Shillong.

Three INSAS rifles, stored inside a black SUV belonging to Umshning-Mawkynroh police outpost, were snatched away on August 15 by a group of masked people who also vandalised the car, cruised around the city brandishing the guns in the air and later set the car on fire.

The incident happened as officials observed India's 75th Independence Day and violence broke out over the death of a former rebel leader in Shillong. During the protests, cars were set on fire, black flags were raised, several incidents of stone pelting were reported from parts of Shillong and petrol bombs were thrown at Meghalaya Chief Minister Conrad Sangma's personal residence.

An anonymous letter was sent to the headman of Mawlai Town Dorbar, with a copy to Superintendent of Police of East Khasi Hills district, recently.

The writer of the letter claimed that they took the three rifles from a group of teenagers, who had allegedly stolen it from the police, and tossed them into the Umkhrah river.

Soon after, a search was launched in the area and a team of Meghalaya Fire and Emergency Services recovered the rifles from a stream today.

"The firearms were fished out in the afternoon from a spot near the Umpohliew Bridge across the river," a government spokesperson said.

The sender of the letter claimed they had taken the rifles and dumped them in the river in order to save the teenagers from any trouble.

An uneasy calm has been witnessed in parts of Shillong after the death of former rebel leader Cherishstarfield Thangkhiew whose family has termed his death a "cold-blooded murder by the police".