Rahul Gandhi Should Be PM, Says MK Stalin At Opposition Event In Chennai

The DMK hosted a number of opposition leaders in Tamil Nadu for a ceremony to unveil a statue of their leader M Karunanidhi, who died earlier this year.

DMK chief MK Stalin has proposed the name of Congress president Rahul Gandhi as the prime ministerial candidate for 2019. "Rahul has got the ability to defeat fascist Modi government. Let's strengthen Rahul Gandhi's hands, let's save the country," he said at an opposition event in Chennai.

However, opposition parties that are trying to stitch together an alliance to take on the BJP in the general elections, are not on board with Mr Stalin's idea, sources have told NDTV. Calling Mr Stalin's proposal premature, sources in the opposition say the PM will only be decided after the election results.

Mr Gandhi and his mother and UPA chairperson Sonia Gandhi were in the Tamil Nadu capital today after the party's big victory in the Hindi heartland in what is seen as another show of opposition strength. The occasion was the unveiling of a statue of DMK patriarch M Karunanidhi, who died in August after a long illness. The two leaders, who attended the event after an invitation from Mr Karunanidhi's son MK Stalin, shared stage with him. A number of opposition leaders were present at the event in Chennai.

Mrs Gandhi was the chief guest of the function and unveiled the statue.

The function was a show of strength for Mr Stalin as well as the united opposition in the south. Andhra Pradesh Chief Minister Chandrababu Naidu, who took on the task of uniting the opposition against the BJP, was present. Kerala Chief Minister Pinarayi Vijayan and Puducherry's chief minister V Narayanasamy of the Congress, attended the programme as well.

Rajinikanth, the newest entrant to politics in Tamil Nadu, was seen sitting in the audience with another actor-turned-politician, Shatrughan Sinha. 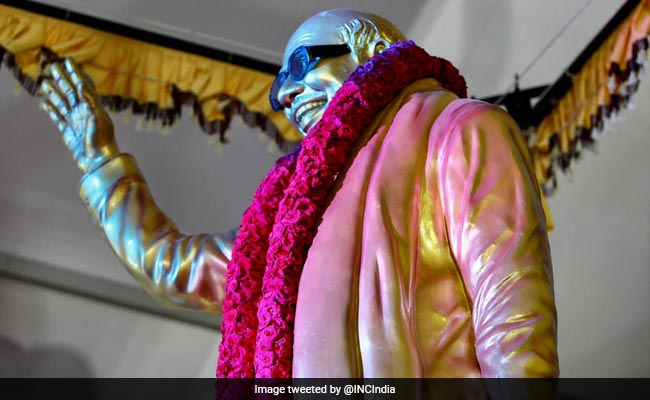 The ties with the Congress and the DMK had been stable since 2004. The DMK, which been part of the UPA alliance, had broken off ahead of the 2014 Lok Sabha elections - with the result that neither party had won even one of 40 seats from Tamil Nadu.

But the two parties have been stable allies since. Rahul Gandhi had visited M Karunanidhi during his last illness and had attended his funeral.

The DMK chief is expected to attend tomorrow's oath ceremonies for Congress chief ministers in the Hindi heartland.