Ananth Kumar Death: Ananth Kumar died at a private hospital in Bengaluru. He was being treated for lung cancer for several months. The Karnataka government Monday declared a three-day state mourning till November 14 as a mark of respect. 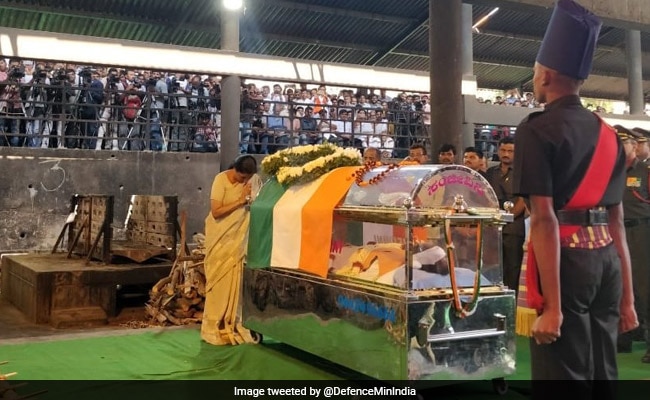 The state funeral of union minister Ananth Kumar, 59, who died at 2 am on Monday,took place today at Karnataka capital Bengaluru's Chamrajpet TR Mill crematorium. The mortal remains of Union Parliamentary Affairs Minister were consigned to flames with full state honours after hundreds of mourners paid their last respect to the departed soul. Before the last rites, the body of the union minister was brought to the Karnataka BJP office at 8 am. The body was kept there for the public to pay their last respects, till 10 am. The body was then shifted to National College Grounds at 10 am.

Ananth Kumar died at a private hospital in Bengaluru. He was being treated for lung cancer for several months. The Karnataka government on Monday declared a three-day state mourning till November 14 as a mark of respect. A government notification said there would be no official programmes held during the state mourning. The national flag would fly at half-mast on all government buildings.

Here are the highlights from union minister Ananth Kumar's funeral:

Nov 13, 2018 16:45 (IST)
The mortal remains of Union Parliamentary Affairs Minister and senior BJP leader Ananth Kumar were consigned to flames with full state honours. As the Army band sounded the bugle to mark the last rites, a 21-gun salute was given to Ananth Kumar draped in the Tricolour in the glass casket.
Kumar's younger brother Nand Kumar lit the funeral pyre amid chanting of Vedic hymns and loud cries of "Ananth Kumar amar rahe!" (long live Ananth Kumar).
Kumar's widow Tejeshwani, daughters Aishwariya and Vijeta and other family members were present at the Chamarajpet crematorium in the city's southwest suburb.
Nov 13, 2018 14:55 (IST)

Nov 13, 2018 14:44 (IST)
Thousands of people, including union and state ministers and the general public, paid homage to late Union Minister Ananth Kumar in Bengaluru on Tuesday, according to news agency IANS.

The 59-year-old Bharatiya Janata Party (BJP) leader died on Monday at a private hospital here due to multiple organ failure.

Anath Kumar's body was kept in a glass casket draped in the national flag for people to pay their last respects.

Thousands of people, including school children, gathered at the National College Grounds from across Bengaluru to pay homage to him.
Nov 13, 2018 14:01 (IST)
BS Yeddyurappa, Nirmala Sitharaman pay their last respects to Ananth Kumar 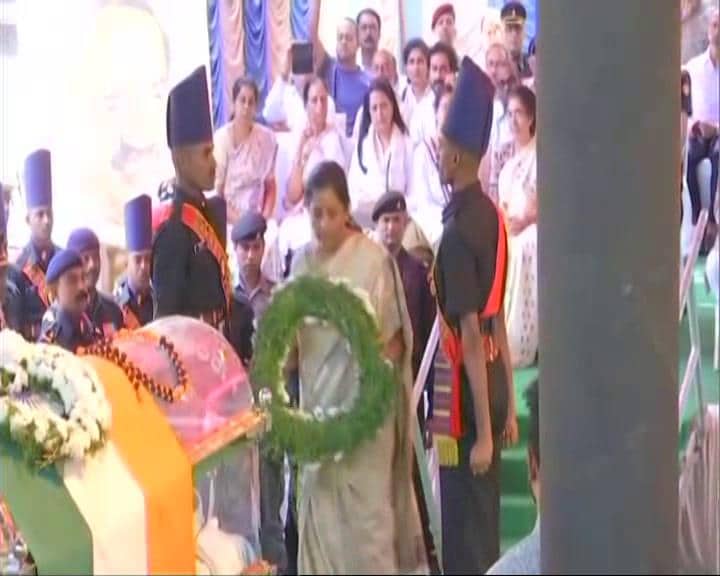 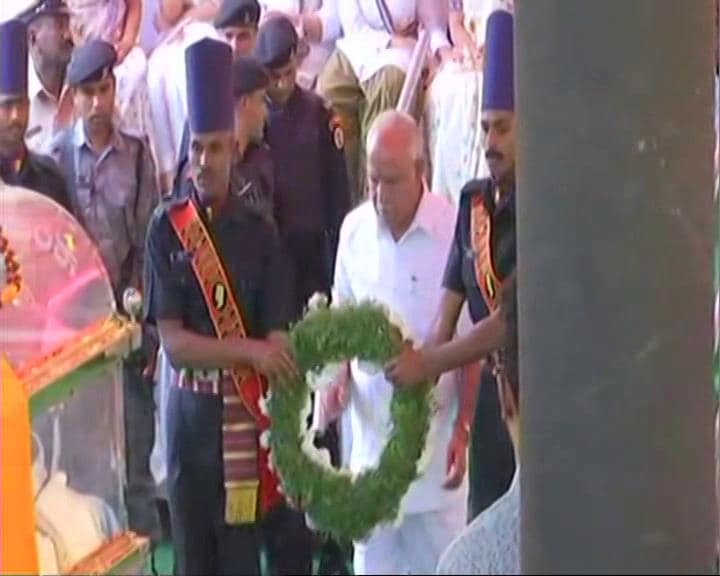 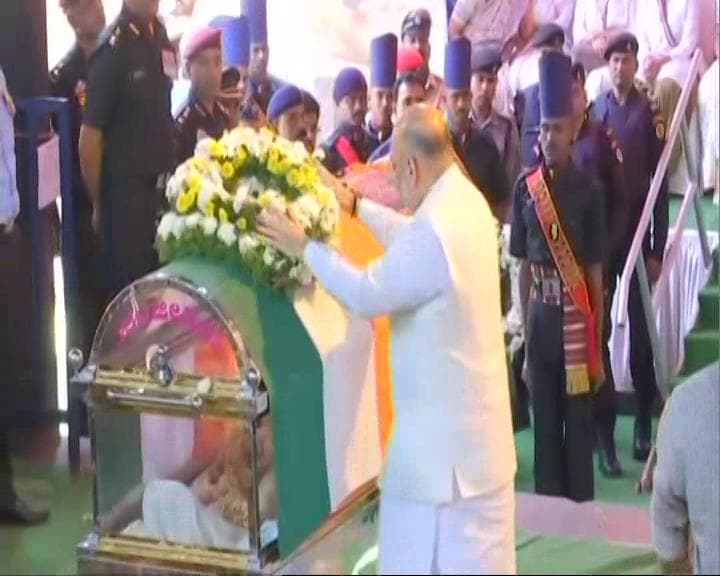 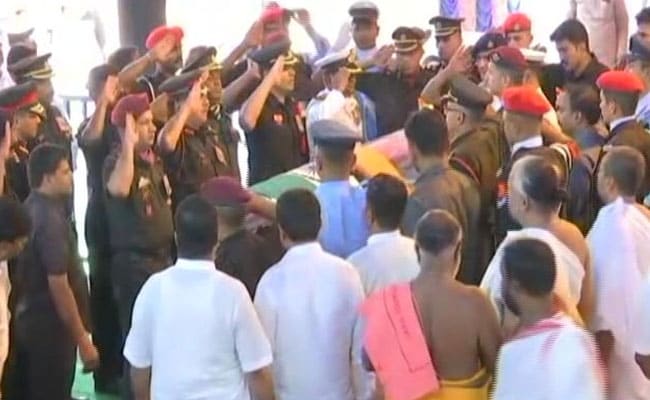 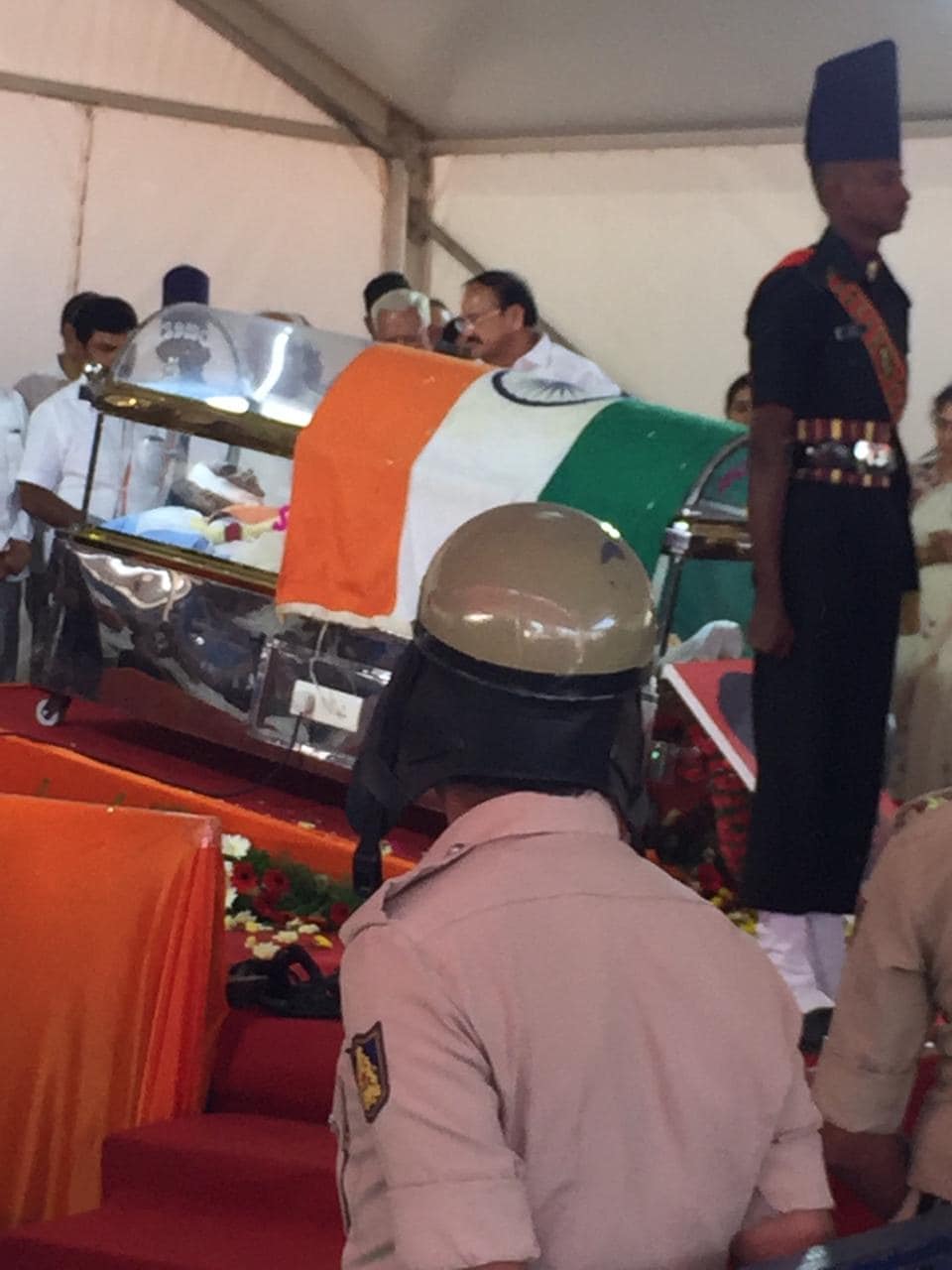 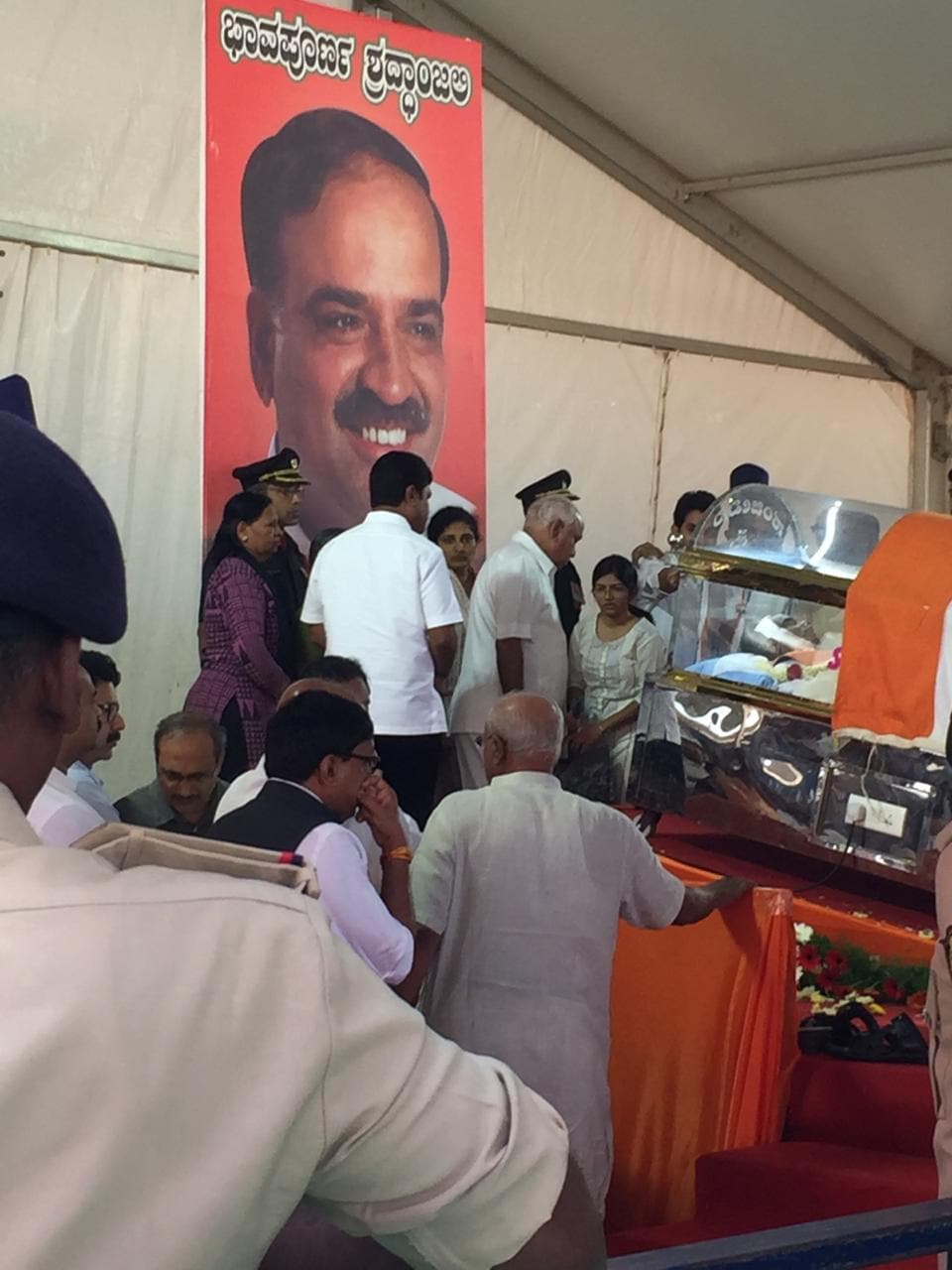 Nov 13, 2018 11:17 (IST)
The body of union minister Ananth Kumar has been brought to Bengaluru's National College ground.
Nov 13, 2018 11:11 (IST)
Indian flag flies at half-mast in Karnataka's Vidhan Soudha on Monday, as a mark of respect to Ananth Kumar 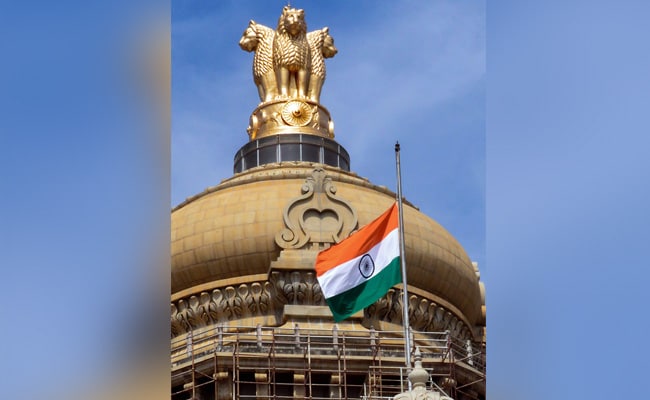 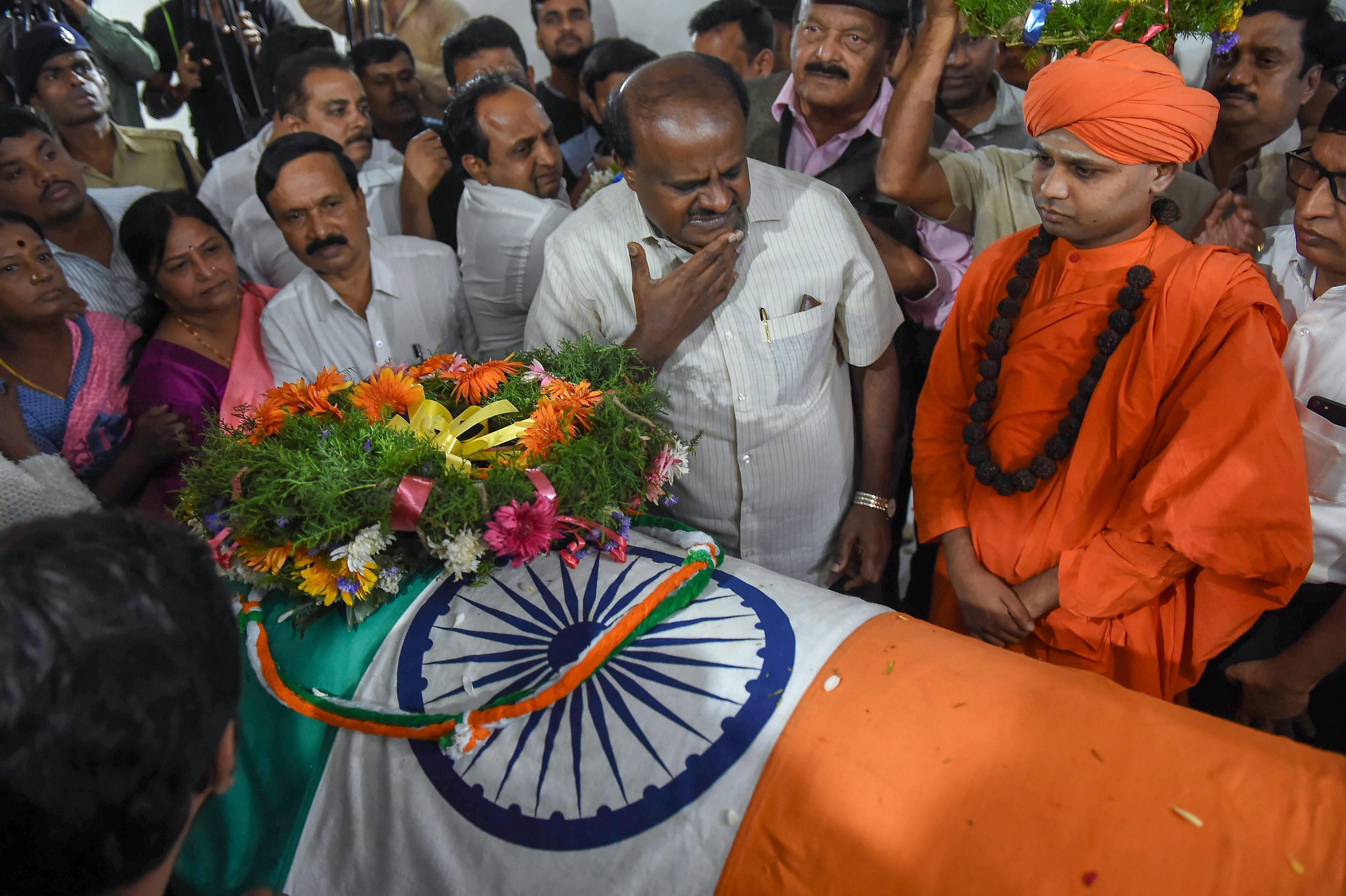 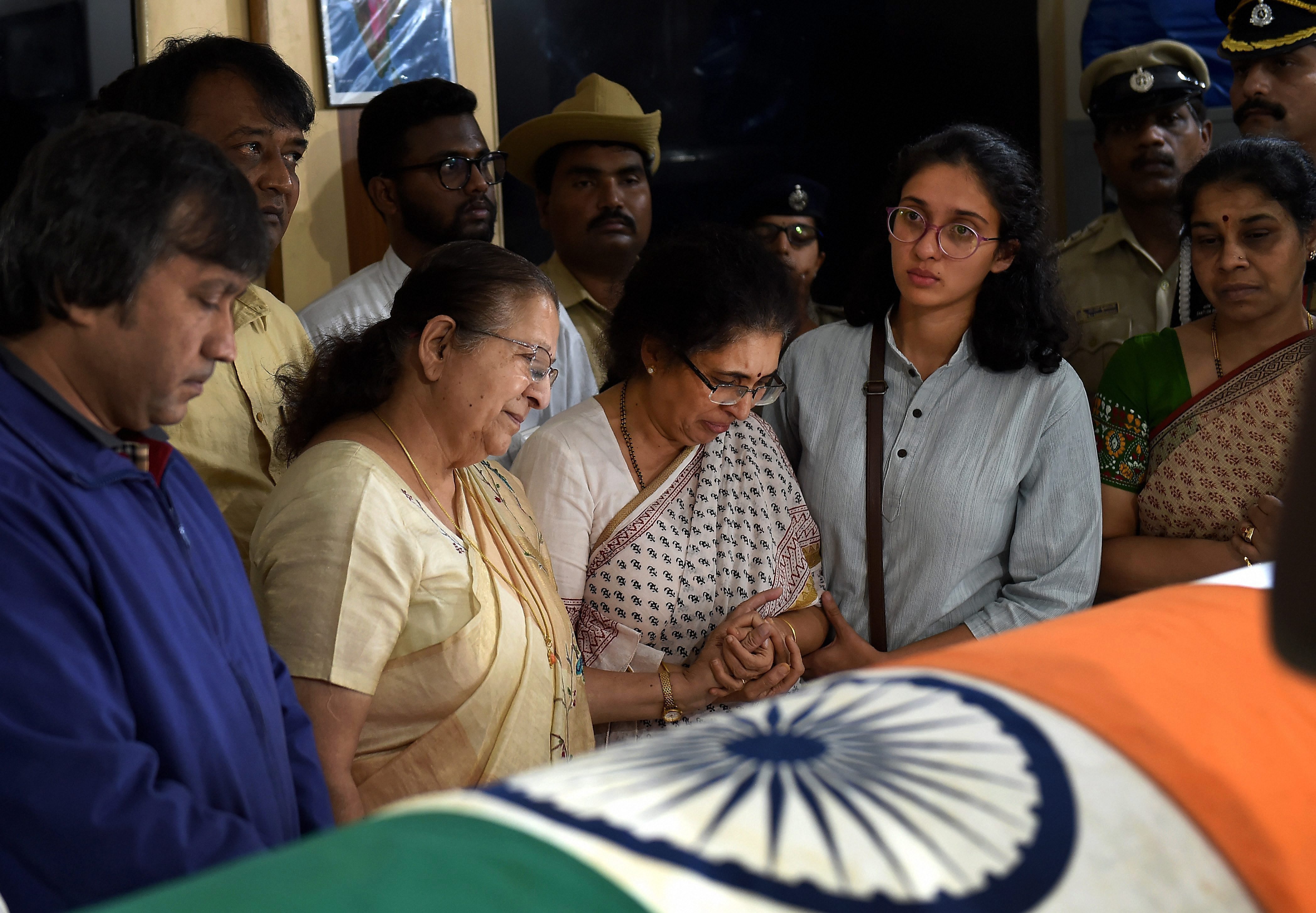 Nov 13, 2018 10:59 (IST)
"Ananth Kumar Amar Rahe": Leaders pay tribute to union minister
A stream of leaders and supporters Tuesday paid their last respects to union minister and senior BJP leader Ananth Kumar, who died on Monday.
The body was taken from his Basavanagudi residence in Karnataka capital Bengaluru, where it was kept since Monday morning to Jagannath Bhavan, the BJP state headquarters at Malleshwarm, in a decorated military vehicle with personnel of the three services- the Army, Navy and Air Force- accompanying it, according to news agency Press Trust of India.

"The cancer had spread to other parts of his body that resulted in his multi-organ failure and death," the BJP's state unit spokesman S Shantaram said.
Nov 13, 2018 09:36 (IST)
PM Narendra Modi had paid tribute to Ananth Kumar yesterday

In Bengaluru, I paid tributes to Shri Ananth Kumar Ji. We've lost an outstanding public servant, who had a positive impact on the lives of many. Also spent time with his family members. pic.twitter.com/SRXPqyY9x5