The bloody trail of mob killings across India fuelled by false rumours of child kidnappers on the prowl appears to have its origins in Jharkhand.

It is here that in May 2017, seven people were murdered by violent mobs on suspicion of child abduction in two different locations near the industrial town of Jamshedpur. Until then, instances of such mob killings were isolated or rare, a scan of media reports suggests.

Since Jharkhand, there have been over 15 incidents of violence across India that followed the same modus operandi: rumours of child abduction surface in local media, social media or platforms like WhatsApp, leading to mob attacks, often on individuals or groups passing through an area.

The greatest irony: the source of the Jharkhand mob killings that began the cycle of rumours and murders may lie in an unverified report of child abduction in a remote corner of the state.

In the first week of May 2017, about two weeks before the violence erupted, local newspapers in Jharkhand reported on the case of a Supai Hambram, a 13-year-old boy from a village called Chakuliya, a remote town nearly 100 kilometers from Jamshedpur, who claimed that a masked man attempted to abduct him at night, when the family was asleep.

The stories appeared in well regarded newspapers - Prabhat Khabar and Hindustan - but ran without a byline, and carried no quote from the police. 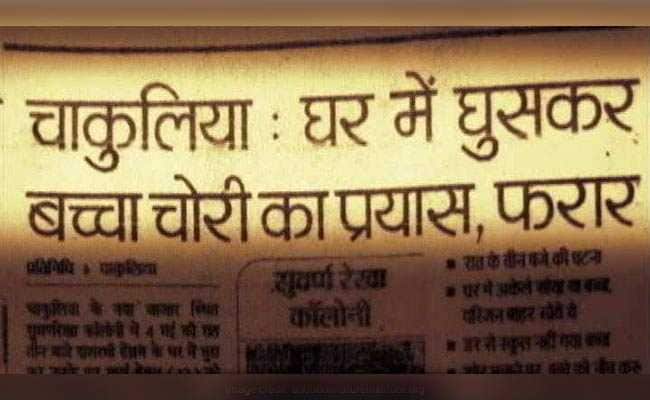 A newspaper report on the Chakuliya story ran without a byline and a police quote.

A few days later, on May 11, Prabhat Khabar reported that a mentally disturbed man was killed by a mob in a nearby village, on suspicion that he tried to abduct a five-year-old boy. This story too ran without a byline and a police quote. This incident, too, does not exist on police records.

We travelled to Chakuliya, and met Supai Hambram. His account did not quite match the version that ran in the newspapers. He said, "I was sleeping on the bed and I suddenly woke up, I saw there was a thief. He came and covered my mouth but I shouted so he ran away".

Locals however maintain the narrative of child abduction, amplifying it from one abductor to several. "Child abductors had come here on a bike, we shooed them away three days before the incident. They cut the electric lines of this boy's house and entered at 3 am, when we heard shouting, we ran towards the house with torch lights and sticks but he had fled by then," said Fani Bhushan, neighbour of Supai.

Police have denied any record of the Chakuliya abduction.

Ranjeet Singh, the editor of the Jamshedpur edition of Prabhat Khabar told NDTV that they took the testimony of the boy at face value, but have since excercised greater diligence in their reporting of such cases.

"Once the mob killings began our reporting did get better because we realised this was becoming a big issue. Before that, we didn't know it would blow up and become this big," he said.

These articles or the newspapers, however, did not feature in the police radar, as they swung into action after the mob killings, making 39 arrests.

Amongst those booked for creating unrest are two men, Shankar Gupta and Saurabh Kumar. A third, Sushil Aggarwal, was questioned. Two of them, Gupta and Aggarwal describe themselves as local journalists based in Jamshedpur, while Saurabh Kumar runs a shop in Jadugoda village, 25 kilometers away from Jamshedpur.

Police claim that on May 11, seven days before the attack, the three men circulated alarmist messages on WhatsApp groups and Facebook.

Aggarwal posted this: "Abductor was in possession of ATM card, chocolates, balls and sedatives".

Both sets of messages are false, said the police, arresting Gupta and questioning Aggarwal. A police complaint has also been filed against Kumar and the case is in the trial stage.

Gupta, out on bail, claims he meant no harm. "In that group the Superintendent of Police other officers and all other big personalities were there but at that time no one took any action," he told NDTV. Aggarwal too offered the same defence.

Crime records show that cases of child abductions have been on the rise in Jharkhand in the run up to the 2017 mob killings, climbing almost three times from 94 in 2014, to 288 in 2016.

But police insist that the rumours behind the mob killings have no bearing on actual instances of abductions. In fact, RK Mallick, the Additional Director General of police, virtually denied the phenomenon of abductions.