Four people were arrested in Jharkhand's Godda district for the mob killing of two men accused of stealing cattle on Wednesday.

In Jharkhand's Godda, 4 men were arrested for being part of a lynch mob that killed 2.

Godda, Jharkhand: A BJP lawmaker from Jharkhand has said he will pay for the legal expenses of four men in Jharkhand accused of killing two others on suspicion of cattle theft in the state's Godda district. Nishikant Dubey, who represents the Godda constituency in the parliament, called it a "personal decision" since he believes the four men were being unfairly targeted for the mob lynching.

"The entire village was involved in the beating. Why are these four people being singled out just because their cattle was stolen?" Mr Dubey told NDTV.

Two Muslim men accused of stealing cattle were beaten to death by a vigilante mob in Godda on Wednesday morning. The two were part of a gang of five that entered a village and allegedly stole 13 buffaloes but some villagers woke up and raised an alarm after which more people gathered and chased the thieves, the police said.

Two First Information Reports or FIRs have been registered in connection with the mob lynching, a senior police official said. 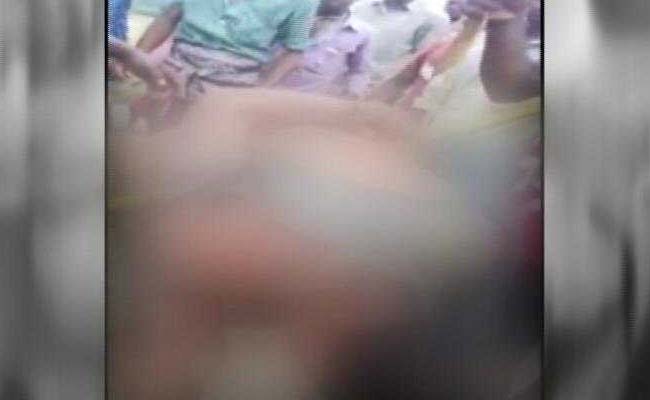 Two men, suspected to be cattle thieves, were beaten to death by a mob in Jharkhand's Godda

While four people have already been arrested in connection with the Jharkhand lynching yesterday, the police are looking for the other accused in the case.

The first FIR was lodged on the complaint of one of the arrested persons, Munsi Murmu, against those killed and others for theft, Superintendent of Police, Rajiv Ranjan told reporters.

The second FIR was lodged on the complaint of Imran Ansari, the father of one of those killed for rioting and murder among other charges, he said.

One of the victims of the lynching had in the past faced two cases of cattle theft in the neighbouring Dumka district, the officer said, adding the other man killed has been identified as Murtaza Ansari.

Besides Munsi Murmu, the other arrested accused in the case are Kameshwar Soren, Kishan Rai and Bhukul Kishku, the police said.

Five people had allegedly stolen buffaloes from the house of Munshi Murmu and others in tribal-dominated Dullu village, the police said on Wednesday. Finding the buffaloes missing, Murmu and other villagers ran after five people who were caught in the adjoining Bankati village with the cattle early morning.

A chilling video, capturing the brutality inflicted on one of the men caught by villagers, was shared widely on social media. The man, half conscious with injury marks on his head, is slung over a bamboo pole and dragged. Those gathered keep abusing him, some even recording it in their mobile phones.

Promoted
Listen to the latest songs, only on JioSaavn.com
The victims were residents of Taljhari in the district, about 200 km from Ranchi, the police said.