Rekha Arya appeared in front of the Uttarakhand Assembly just a few minutes before the floor test.

Dehradun: Rekha Arya, a little known Congress lawmaker from Uttarakhand, drew much attention and even trended for a while on social media as the state's legislators participated in the Harish Rawat trust vote on Tuesday.

Ms Arya, untraceable for a few days, created a flutter when she walked into the state assembly this morning with the BJP's Ajay Bhatt, confirming her party's worst fears - that she would vote against Harish Rawat when he sought a vote of confidence.

Ms Arya, BJP legislators said, indeed voted against Mr Rawat, adding her name to the list of party dissidents. Her anti vote, said sources, meant that Mr Rawat had 27 votes against him and 33 in his favour.

While the result will officially be announced by the Supreme Court, which had ordered the trust vote in the presence of observers and with the proceedings videographed, the Congress is already celebrating a Rawat majority.

If it lost an Arya, the Congress also acquired another when the BJP's Bhim Lal Arya walked into the Assembly with Harish Rawat and said he would vote Congress. The BJP had suspended rebel Mr Arya earlier, but he could vote today since he has not been disqualified. 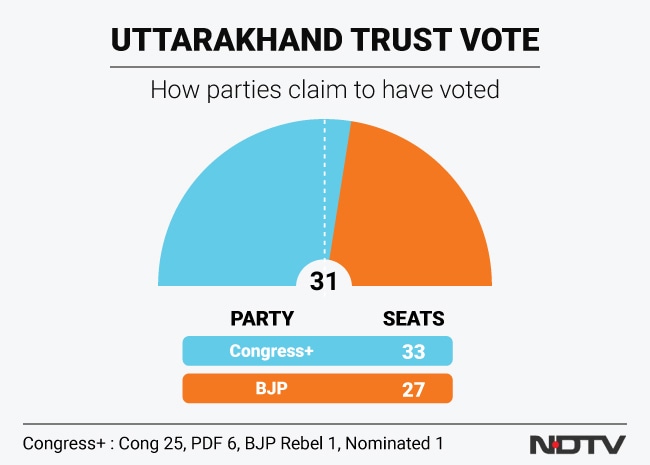 The trust vote was expected to be very close.

The Congress had been unable to establish contact with Rekha Arya for the last three or four days, though the party said it had talked to her family and was confident that "her heart is with the Congress".

Ms Arya was not among the rest of the Congress' legislators who spent the night before their leader's big trust vote at resorts in hill town Mussoorie.

This morning she had walked into assembly with a big smile and flashing a V sign for victory.

Mr Rawat had to show the support of only 31 lawmakers today as nine dissident Congressmen barred from voting bringing the effective strength of the 70-member House down to 61.