Watch: "You Were Given 5 Minutes" - Amit Shah Snubs Haryana Minister

Anil Vij was expected to express gratitude to Mr Shah for attending the event. But he soon deviated to the history of Haryana, its contribution to Green Revolution, the state's performance in the Olympics and sports infrastructure built by the state government. 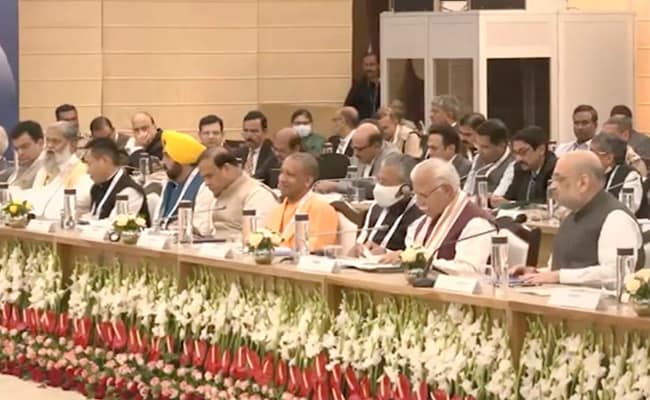 Amit Shah, who was just a few seats away, had started by listening intently

Haryana Home Minister Anil Vij got a public snub from Union Home Minister Amit Shah today for his lengthy speech at a programme organised by the Union home ministry. During the eight-and-half minute speech, Mr Shah interrupted him four times and reminded him that he was allotted only five minutes. Eventually, Mr Shah cut him short.

The occasion was the opening of a workshop organised by the Union Home Ministry at Haryana's Surajkund. Mr Vij was to deliver the welcome address. The keynote address was to be given by Haryana Chief Minister Manohar Lal Khattar. Mr Shah was the last speaker.

Mr Vij was expected to express gratitude to Mr Shah for attending the event. But he soon deviated to the history of Haryana, its contribution to Green Revolution, the state's performance in the Olympics and sports infrastructure built by the state government. He even talked of the grievance redressal session he held every week.

Mr Shah, who was just a few seats away, had started by listening intently. Then he sent a note to the minister, apparently asking him to wind up. When it had no effect, he turned on his mic and tapped it, gesturing at Mr Vij.

But the state Home Minister still did not take the cue.

"Anil-ji, you were allotted five minutes. You have already spoken eight and a half minutes. Please end your speech. This is not the place to give such long speeches. keep it brief," Mr Shah finally said.
But Mr Vij asked for a few more seconds, saying he had one more point to make.

When Mr Shah allowed it, he continued with the long list of achievements. By now, Mr Shah was visibly distraught. "Anil ji, please forgive me. This will not work. Finish it," he said.

Mr Vij's response was to begin his closing remarks.

But Mr Shah had enough. "Done. The programme should be carried forward," he said sternly.

In view of the extra time taken by Mr Vij, his boss, Mr Khattar, spoke for only three of the five minutes allotted to him.

Under the two-day Union ministry programme, Chief Ministers of nine states and Home Ministers or top police officers will discuss law and order and national security under the chairmanship of Mr Shah. Prime Minister Narendra Modi will address the event tomorrow.