Uttarakhand Rain: Three days of incessant rains in the state have caused damages worth Rs 7,000 crore, Chief Minister Pushkar Singh Dhami, who has been visiting the affected areas since Tuesday, said. He accompanied Amit Shah for today's aerial survey. 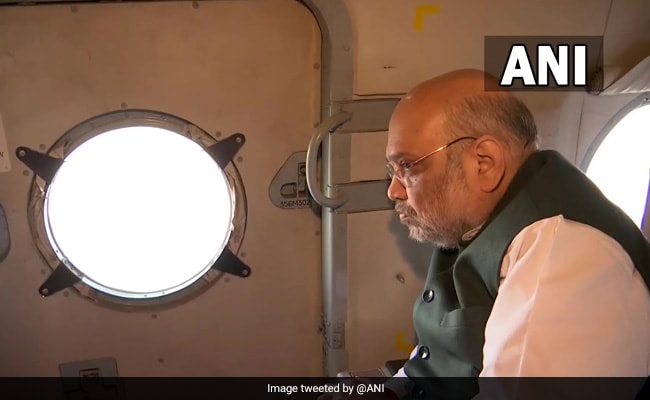 Union Home Minister Amit Shah undertook an aerial survey of the rain-ravaged areas of Uttarakhand on Thursday as relief and rescue operations continued in the worst-hit Kumaon region amid efforts to restore connectivity and evacuate people from vulnerable areas.

He will return to Jollygrant airport and hold a meeting with officials in the presence of the Chief Minister.

Three days of incessant rains in the state have caused damages worth Rs 7,000 crore, Mr Dhami who has been visiting the affected areas since Tuesday told reporters at the Pantnagar Airport.

Restoring the network of damaged roads and bridges at the earliest and evacuating people to safety is the priority at the moment, he said.

Meanwhile, the toll in rain-related incidents in the state has risen to 54 while 19 people are injured and five still missing, the state Emergency Operation Centre said in its latest report.

Nainital district has reported the maximum number of 28 deaths.

Due to the heavy downpour and flooding of the Naini lake, the area around Dhobi Ghat in Nainital is experiencing major landslides, District Magistrate Dhiraj Singh Garbiyal said.

This area is right at the base of Nainital and is believed to be the foundation of the town. About a 100 families living in Dhobi Ghat have been shifted, he said. Mr Garbiyal said relief camps have been set up at a number of places.

Relief camps have also been set up in Puchdi area which was flooded. Fifty-four people of 10 families living in Puchdi Nai Basti have been accommodated in a relief camp set up at Government Girls Primary School Poochri, he said.

A total of 150 people were brought to Ramnagar safely in roadways buses and sent to their destinations free of cost while 97 families affected by floods in Lalkuan have been shifted to a gurdwara and relief camps, he said.

Meanwhile, the chardham yatra which was halted temporarily on October 18 due to the heavy rain alert issued by the Met department has resumed with pilgrims leaving for Kedarnath, Badrinath, Gangotri and Yamunotri from Rishikesh Chardham bus terminal and Haridwar bus stand.