Parties should "keep quiet" if they were unable to appreciate what PM Modi and the country's armed forces had achieved through the air strike on a Jaish-e-Mohammed terror camp in Balakot, Amit Shah said 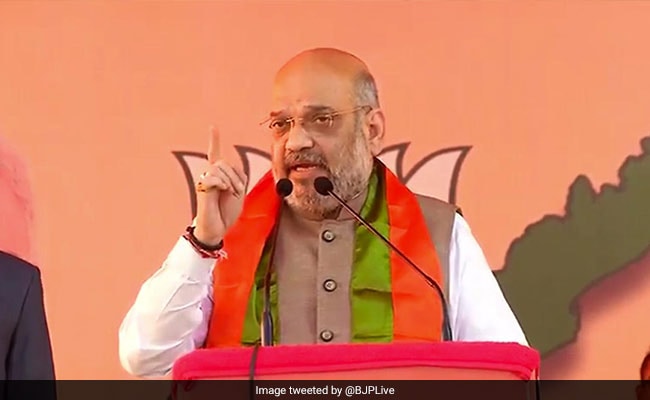 BJP president Amit Shah today hit out at opposition parties, alleging they "raised doubts" on the courage of the armed forces and their demand for proof of the IAF air strike brought a "smile on Pakistan's face".

The party president said these parties should "keep quiet" if they were unable to appreciate what Prime Minister Narendra Modi and the country's armed forces had achieved through the air strike on a Jaish-e-Mohammed terror camp in Pakistan's Balakot.

Praising the PM's leadership, Mr Shah claimed PM Modi went about his work routinely even as he thought up a plan to punish the perpetrators of the Pulwama attack on February 14 which killed 40 CRPF personnel.

He claimed PM Modi made the country understand what "zero tolerance" for terror meant by ordering the surgical strike and air strike.

"Opposition leaders do not know what happened. Mamata di asks for proof. Rahul baba says it is being politicised. Akhilesh asks for a probe. Be ashamed that your statements have brought a smile on Pakistan's face," Mr Shah said.

"Pakistan smiled only after the press conferences of the opposition leaders where they raised questions on the courage of the armed forces," he claimed.

"We can understand that you do not have the courage of Modi ji, but if you cannot support and praise what Modi ji and the armed forces did, then at least keep quiet," Mr Shah added.

"After the Pulwama attack, people said surgical strike was not possible, as army could not go (to bust terror camps). Modiji, while going about his routine work quietly, decided and planned (the counterattack) and our brave air force jawans killed hundreds of terrorists in an air strike and came back safely," he said.

He said with these strikes on terror camps, India has become only the third country in the world after the US and Israel to avenge attacks on its armed forces personnel.