Life went on as normal in different parts of the city with schoolchildren and morning walkers taking to streets and businesses opening at their usual time. 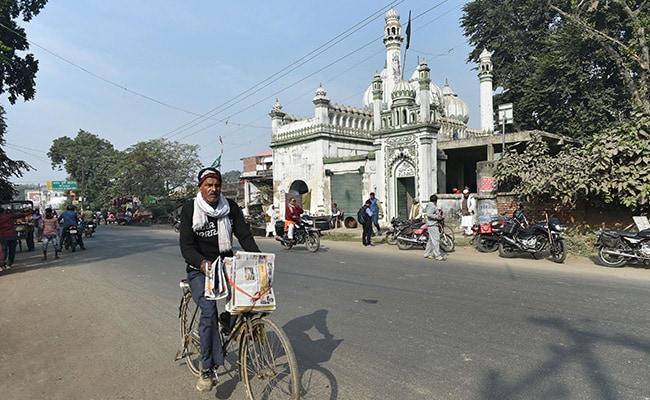 Police personnel kept an eye on activities in Ayodhya to prevent any law and order situation.

The 27th anniversary of the Babri Masjid demolition on Friday remained a low-key affair with both Hindu and Muslim religious leaders downplaying the occasion amid tight security measures.

Life went on as normal in different parts of the city with schoolchildren and morning walkers taking to streets and businesses opening at their usual time.

In the evening, the administration in a statement here said, "Peace prevailed in the entire division of Ayodhya on December 6. The Friday namaaz was held peacefully in an atmosphere of amity. Police and administrative officials thanked people of Ayodhya, seers and the media for contributing to the maintenance of peace."

Officials also hoped that the Ganga-Jamuni culture be maintained throughout the length and breadth of the country, the statement said.

While right-wing Hindu organisations in the past "celebrated" the occasion as "Shaurya Diwas" to mark the demolition of the mosque in 1992, the Vishwa Hindu Parishad (VHP) decided against it this year.

Senior priest of Hanumangarhi temple Raju Das told PTI that the day should now be marked as the "day of amity".

"The temple is witnessing a regular flow of devotees. It is a normal day for us. We are observing this day as "sauhaard diwas" (day of amity)," he said.

Raju Das said the programme to lit lamps, which was decided earlier in the morning, was cancelled.

He did not give any reasons for it.

"In the afternoon, we organised a religious at the Shri Ramjanmabhoomi Nyas workshop," he said.

The All India Muslim Personal Law Board (AIMPLB) said while the anniversary of the demolition was a day of mourning for Muslims, it was "up to individuals" if they wanted to observe "yaum-e-gham" (day of sorrow).

At Jama Masjid Malik Shah here, children were seen reading the Quran under the guidance of Haji Ismail Ansari, even as a poster with a picture of the Babri mosque hung on a wall.

Mohammed Shahzad Raeen, a poultry dealer, said there was no problem among Hindu and Muslim residents of Ayodhya who have been living peacefully for generations.

Around 150 Muslims attended Friday prayers at the Terhi Bazaar mosque in the vicinity of the Ramjanmabhoomi police station in the afternoon.

In the speech before the prayers, Maulana Shafique Alam said, "December 6 is a day of mourning for us."

He welcomed the decision of the AIMPLB to file a review petition against the top court's November 9 verdict.

The Maulana asked the people to demand their rights and remember "Khuda" (God).

People from different age groups turned up at the mosque to offer prayers.

At a primary school in Ranopalli area, classes were held in a regular manner.

"In all, there are 74 students in the school. Yesterday, 52 students had turned up. Today, around 30 are present," Lal Bahadur Yadav, a teacher, said.

When asked if the dip in attendance was due to the anniversary, he said, "Possibly yes, as anxiety is present in some parents over December 6."

In the Rikabganj area, devotional songs were playing at various temples.

Milk shops, eateries and other businesses in the city were operational.

"It is a normal day for us," said 60-year-old Brajesh Kumar.

Police personnel kept an eye on activities to prevent any law and order situation.

The security arrangements are similar to that put in place ahead of the Supreme Court verdict, a senior police officer said, adding that religious organisations assured the administration that the anniversary would be a low-key affair.

"The security plan for December 6 will be a continuation of the plan we had devised for November 9," Additional Director General of Police (Law and Order) PV Ramasastry said.

Anuj Kumar Jha said, "All parties who had organised programmes on the occasion felt the importance of sending a message of amity. Most of them cancelled their programmes."

He said adequate security personnel were deployed following intelligence inputs that some people might violate Section 144 of the CrPC by holding a congregation.

"Proper monitoring and checking is being done. So far, there is no report of any untoward incident," Mr Jha said, adding that there was no restriction on devotees visiting temples in the city.

SSP Ashish Tiwari said, "We have been touring the entire city.

Deployment has been done in such a manner that the security apparatus is robust without any problem to the common man. The force is already undertaking foot march and drones are being used to keep an eye on various developments."

Mr Tiwari said the entire district had been divided into four zones, 10 sectors and 14 sub-sectors from a security perspective.

"As many as 78 sand bag posts have been established with armed policemen posted there. Barriers have been put in place to control traffic. As many as 269 police pickets have been set up in sensitive areas," Mr Tiwari said.

The SSP said that 305 "troublemakers" had been identified and action was being initiated against them.

"To combat any emergency situation, five arresting parties have been formed in addition to 10 temporary jails," he said, adding that anti-sabotage teams were checking hotels, dharamshalas and other public places.