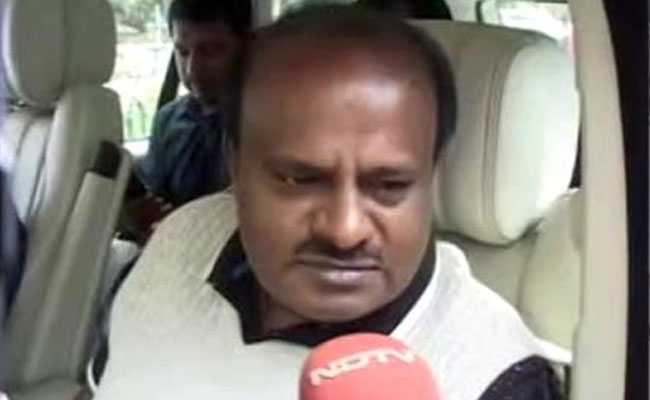 "BJP has shown how desperately it wants to come back to power," HD Kumaraswamy said.

Amid a political turmoil in Karnataka, Chief Minister HD Kumaraswamy accused the BJP of creating "nuisance" to destablise the government, but expressed confidence that the current crisis would fizzle out soon.

HD Kumaraswamy, who is preoccupied with pre-budget consultation meetings in Bengaluru, also dismissed reports of meeting Prime Minister Narendra Modi and the likely resignation of four Congress ministers from the state cabinet. He emphasised that the Congress-JD(S) ties were "strong" and the parties would together fight the upcoming Lok Sabha polls.

On Tuesday, two independent MLAs withdrew their support to the coalition government in a significant turn to the political war that erupted in the state, with both sides venting their fears of poaching.

"There is no plan to meet Modi. No Congress ministers are resigning. No MLAs from Congress or JD(S) will resign and shift to BJP. It is not going to happen. This nuisance has been created by the BJP," HD Kumaraswamy told news agency PTI.

Asserting that the ruling Congress-JD(S) coalition was "stable and strong", he said his MLAs will not fall for the offer made by the BJP. "My government is stable. Congress and JD(S) are together. We will be together even in the Lok Sabha elections," he said.

Attacking the BJP for trying to destablise the Karnataka government, the JD(S) leader sought to know why BJP has holed up its 104 MLAs in a resort in Gurgaon, Haryana at a time when several places in Karnataka face drought.

"BJP has shown how desperately it wants to come back to power. They have made a fool of themselves before people. They have made a mockery of our democracy by offering huge amount to some of our JD(S) MLAs," he said.