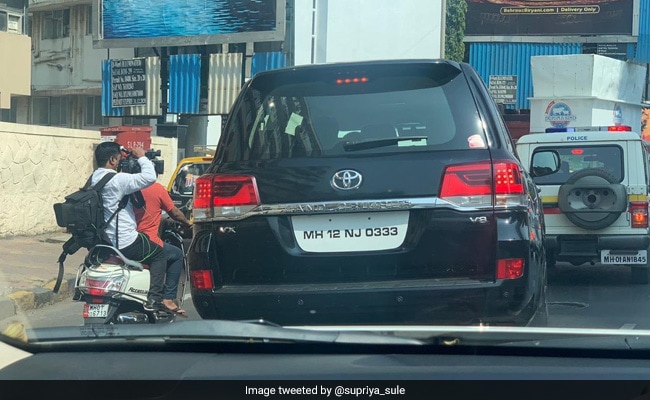 Supriya Sule's advice on breaking news coverage received over 2000 likes in one hour.

In the midst of high political drama in Maharashtra, Supriya Sule, NCP leader and daughter of Sharad Pawar, on Sunday took time off to post a tweet expressing concerns about media safety while covering breaking news.

"I agree it's a Breaking News but Please Take Care. Media Safety First. I am worried about the Driver and Cameraman," Ms Sule tweeted along with a photograph of a media person following NCP leader Sharad Pawar's car. She also posted the same tweet in Marathi with a similar picture.

I agree it's a Breaking News but Please Take Care. Media Safety First. I am worried about the Driver and Cameraman. pic.twitter.com/ziUoxeTzIk

The photo shows two men on a scooter with the one in the back holding a video camera. He is seen pointing his video camera at Mr Pawar's black Toyota Land Cruiser, led by a police vehicle in Mumbai. The photo appears to have been clicked from the front seat of a car behind that of Mr Pawar's.

The tweet received over 2000 likes each, an hour after she posted it with several users commented to appreciate her for her concerns. The tweet was also re-tweeted several hundred times.

Ms Sule had been vocal in expressing his disappointment in the current political situation in Maharashtra after her cousin, Ajit Pawar, took oath as the Deputy Chief Minister in the Devendra Fadnavis government on Saturday morning.

The 50-year-old leader has been posting several WhatsApp statuses to mirror her discontent. Ahead of the Supreme Court hearing on the NCP-Congress- Shiv Sena plea against the government formation by Devendra Fadnavis, Ms Sule posted on WhatsApp, "I believe... power comes and goes... only relationships matter..." "Good morning... values will eventually win.... honesty and hard work never goes waste... that path is harder but sustains long term," Ms Sule said in another status update.

Soon after Devendra Fadnavis, backed by NCP's Ajit Pawar took oath, Ms Sule had posted - "Party and family split" and "Who do (you) trust in life never felt so cheated in my life.. defended him loved him, look what I get in return."

After weeks of talks, NCP, Shiv Sena and Congress announced that they would come together to form a coalition government in Maharashtra, but the BJP pulled off an overnight stunner followed by a quiet oath ceremony on Saturday. The three parties approached the top court claiming that Sharad Pawar's nephew Ajit had mislead the Governor and that they did not have the numbers.