This morning, Supriya Sule's cousin Ajit Pawar was sworn in as Deputy Chief Minister as the BJP's Devendra Fadnavis became Chief Minister for the second time. 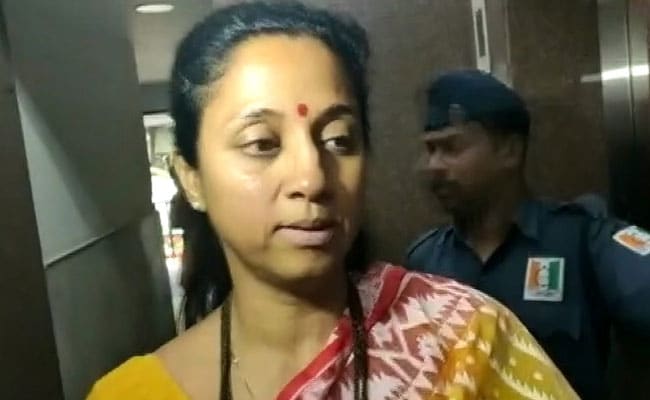 Supriya Sule said the NCP will address a press conference later in the day.

"Party and family split," said Supriya Sule's status on the messaging app. Moments later, the status message read: "Who do (you) trust in life never felt so cheated in my life.. defended him loved him, look what I get in return." 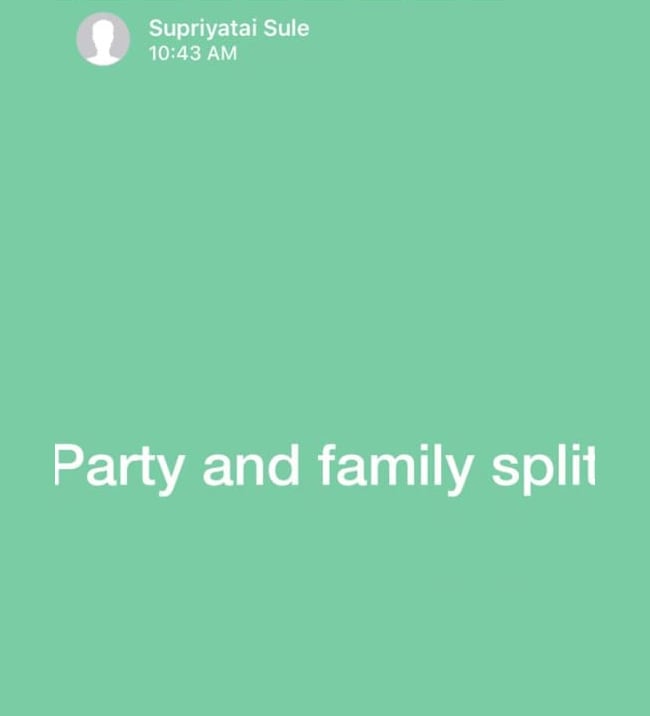 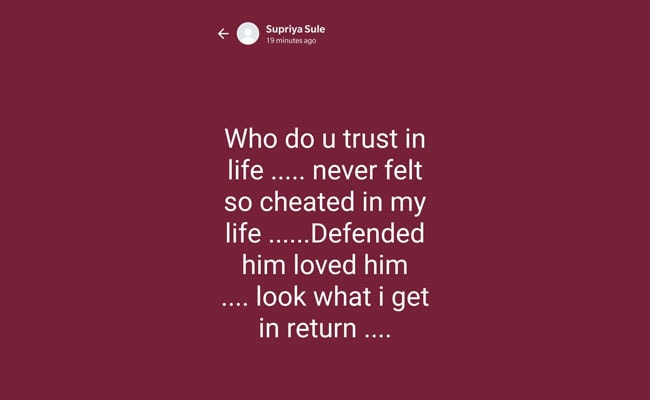 This morning, Supriya Sule's cousin Ajit Pawar was sworn in as Deputy Chief Minister as the BJP's Devendra Fadnavis became Chief Minister for the second time.

Ms Sule, an NCP parliamentarian, said nothing to reporters beyond her status messages.

Until last night, Ajit Pawar had been part of all meetings to discuss the Shiv Sena-NCP-Congress alliance, along with his uncle Sharad Pawar. Sharad Pawar had declared after the first joint meeting of the three parties that Sena chief Uddhav Thackeray would be chief minister of the alliance.

Sharad Pawar and Uddhav Thackeray are to address a press conference in the afternoon.

The BJP claims all 54 NCP MLAs have handed their letters of support for Devendra Fadnavis but Sharad Pawar has denied it. "Ajit Pawar's decision to support the BJP to form the Maharashtra Government is his personal decision and not that of the Nationalist Congress Party (NCP). We place on record that we do not support or endorse this decision of his," tweeted the 79-year-old, a master political strategist who appeared to be the unlikely victim of a stunning twist.

NCP leader Nawab Malik said letters of support collected from party MLAs for the Shiv Sena-led alliance have been "misused" for this morning's oath.

Shiv Sena leader Sanjay Raut this morning said his party had been stabbed in the back by Ajit Pawar.

""Till 9 pm this mahashay (person) was sitting with us and participating in discussions. He suddenly vanished. He was not meeting the eyes while talking, we could tell something was amiss. His phone was not available," said Sanjay Raut.