People reached the Mundali, Naraj, and Jobra barrages in Cuttack district over the past two days and stood on the two sides of the bridges, looking at swollen Mahanadi. 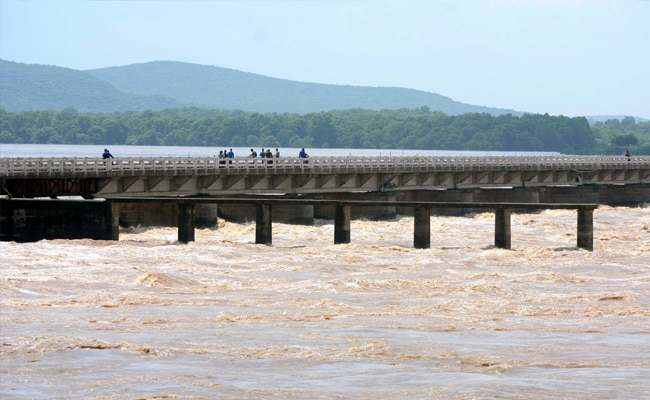 The Mahanadi, which has caused misery for many across several districts of Odisha due to floods in the wake of incessant rainfall, has turned into a tourist attraction for some who are making a beeline to see the mighty river in spate.

The situation is reminiscent of a popular scene in the 2020 Oscar-winning South Korean film 'Parasite', where a woman was talking over phone about how last night's rain "was such a blessing" as a chauffeur, whose semi-basement house was devastated by the floods, drove the car.

Hundreds of people reached the Mundali, Naraj, and Jobra barrages in Cuttack district over the past two days and stood on the two sides of its bridges, gazing at the Mahanadi, which continued to surge.

Children, schoolchildren, couples and women with babies in arms were among the people of all ages who thronged the barrages. They clicked photos and videos of the river, and also took selfies, while some even sipped tea as they stood by the riverside.

Police had a tough time managing the traffic, which moved at a snail's pace as people parked their motorcycles along the barrages. The scene is the same in several other bridges over the Mahanadi in the state.

This happens whenever the Mahanadi, parts of which remain dry most of the season, gets swollen. The river has a length of 494 km and a drainage area of 65,580 sq km in the state.

Special Relief Commissioner Pradeep Kumar Jena has appealed to the people not to go close to the river by risking their lives and taking selfies, but it seemed to have fallen on deaf ears.

The flood situation in the Mahanadi river system remained grim as it continued to swell, with around 1.5 lakh people in 237 villages being marooned.

The flow of floodwater reached its peak in the Mahanadi delta region after Tuesday midnight. The reading at Mundali barrage declined to 11.13 lakh cusecs at 1 pm on Wednesday against 12 lakh cusecs on Tuesday.

The first flood of the season has affected over 2 lakh people in 10 districts, while more than 27,000 people have been evacuated and taken to temporary shelters so far.

Rajnath Singh Performs "Shastra Puja" At Military Base In Uttarakhand