The reference of non-interference by third parties is seen as Russia strongly coming out in support of India's position on Jammu and Kashmir. 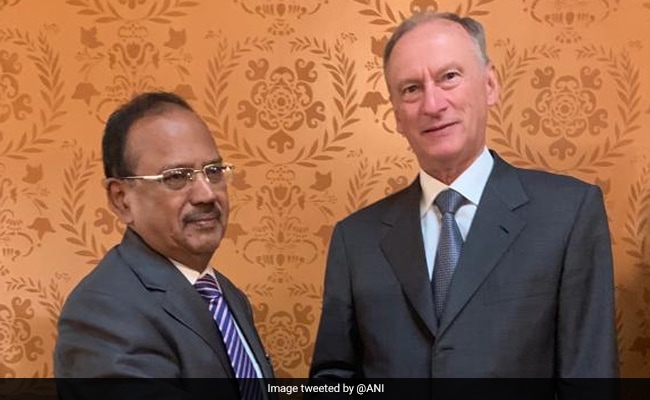 In the backdrop of renewed focus on Kashmir issue, National Security Advisor Ajit Doval visited Moscow on Thursday and held talks with his Russian counterpart Nikolai Patrushev during which both sides underlined support for principles of sovereignty, territorial integrity and non-interference of third parties.

The reference of non-interference by third parties is seen as Russia strongly coming out in support of India's position on Jammu and Kashmir.

The talks between Ajit Doval and Nikolai Patrushev also covered a range of key issues including ways to intensify counter-terror cooperation between the two countries and preparations for Prime Minister Narendra Modi's visit to Russian city of Vladivostok next month to attend the Eastern Economic Forum.

"The longstanding position of both sides on importance of their bilateral consultations and mutual support for principles of sovereignty and territorial integrity and non-interference of third parties was reiterated," a government statement said.

Earlier this month, India scrapped Article 370 provisions in the Constitution to withdraw Jammu and Kashmir's special status and bifurcated it into two Union Territories, evoking strong reactions from Pakistan.

While Pakistan has been trying to internationalise the Kashmir issue, India's long-standing position has been that it is a bilateral matter between it and Pakistan.

"The discussions based on mutual trust and confidence showed identical or close positions on various issues characteristic of the special and privileged strategic partnership between the two countries," the statement said.

"Both sides reaffirmed their intention to intensify counter terrorism cooperation," it said.

"Rogozin applauded the progress of the Chandrayaan programme and conveyed Russia's support and best wishes for the Mission's success," the government said.

"Both sides also discussed long term aspects of space cooperation, which is expected to figure prominently in the bilateral summit in Vladivostok," it said.