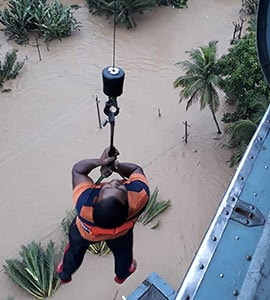 The Indian Commercial Pilots' Association (ICPA) today wrote to Prime Minister Narendra Modi, expressing its willingness to fly planes to Kerala on a "voluntary basis" in the larger interest of the affected people in the state.

"We are willing to fly the planes without payment on voluntary basis to the cause of these operations. We consider this a unique privilege that we can use to assist in such operations," the association said in the letter.

"We have full faith that Sir you will surely turn your attention to the plight of Air India and Air Indians once calm is restored," the letter stated.

The association's letter to the prime minister comes a day after the pilots threatened to stop operations if their flying allowance dues were not paid immediately.

"ICPA pilots on the Airbus 320 and Boeing 787 in Air India are ready and committed to the cause of OPERATION MADAD & OPERATION SAHYOG. We will support the government and the PMO in the endeavour to help our fellow citizens in Kerala," the letter said.

"We are ready for any help as pilots on voluntary basis for Kerala, like we have always done in the past," the letter added.