The government's aim is to take the Indian economy to USD 10 trillion by 2030, and defence is one of the sectors that will help contribute towards it, Defence Minister Rajnath Singh said. 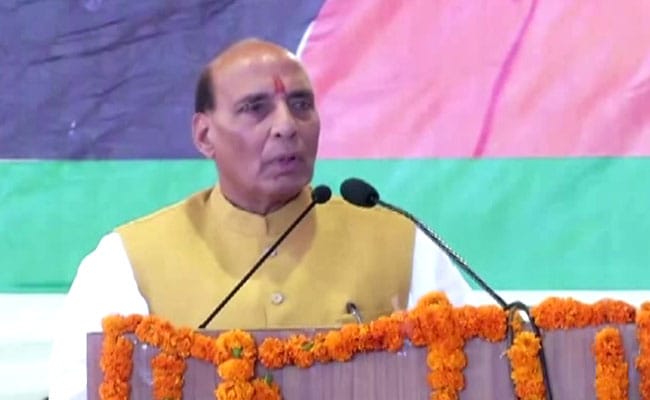 The government's aim is to take the Indian economy to USD 10 trillion by 2030, and defence is one of the sectors that will help contribute towards it, Defence Minister Rajnath Singh said on Tuesday.

Speaking at the Society of Indian Defence Manufacturers (SIDM) Annual General Meeting, held with the theme "Make in India: Marching Towards USD 26 billion Defence Industry by 2025", Mr Singh said due to several reasons, the Indian defence industry in the past had not performed to its full potential.

"This has led to the country's dependence on imported arms," he said.

Under the "Make in India" initiative, several important steps have been taken to change the status quo and to make India not only a major arms manufacturing hub in the world but also a net defence exporter, the defence minister said.

"A country of India's size and global prominence cannot afford to rely on imported arms to conduct its sovereign defence and foreign policy," he added.

Mr Singh said defence has been identified as one of the most prominent sectors under the "Make in India" Initiative.

"The current size of the Indian economy is around USD 2.7 trillion and our goal is to make it to USD 5 trillion by 2024 and subsequently, to USD 10 trillion by 2030.

"Amongst several sectors of the economy which are set to contribute to this growth, defence has been identified as one of the most prominent sectors under the ''Make in India'' initiative," the minister said.

Noting that India has a huge defence industrial base, Mr Singh said it comprises nine giant Defence Public Sector Undertakings (DPSUs), 41 Ordnance Factories (OFs) and 50 dedicated R&D labs and other establishments under the umbrella of the Defence Research and Development Organisation (DRDO).

Besides, there are 70-odd licence-holding companies in the private sector. The DPSUs, OFB and the DRDO together have nearly a 1,70,000-strong dedicated workforce, he said.

"In our envisaged Defence Production Policy, we have clearly spelt out our goal to achieve a turnover of USD 26 billion in aerospace and defence goods and services by 2025, involving an additional investment of nearly USD 10 billion and creating employment for nearly 2-3 million people," Mr Singh said.

The defence minister also listed out steps taken by the government to encourage production in the defence sector by the private players.

In this context, he said simplification of industrial licensing process, hiking of the the FDI cap, streamlining of the defence offset policy have been among several such initiatives taken to encourage private players.

"It is also proposed to offer 5,000 components (currently imported) to the industry for development, indigenisation during 2019-2024," Mr Singh said.