Terming the inauguration of AIIMS a moment of pride in Himachal, PM Modi said that the state has played a crucial role in "Rashtra Raksha". 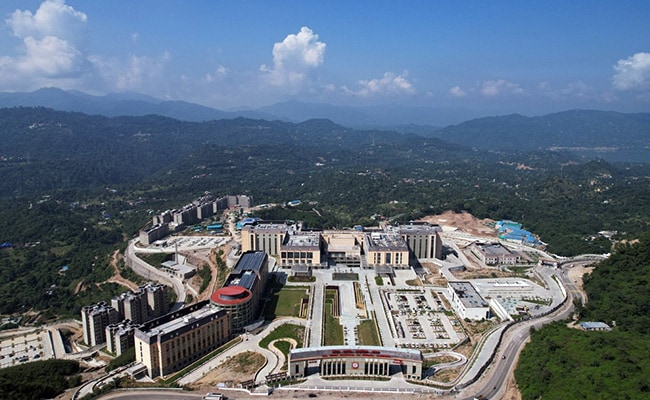 PM Modi termed the inauguration of AIIMS a moment of pride in Himachal Pradesh.

Prime Minister Narendra Modi on Wednesday inaugurated the All India Institute of Medical Sciences in Himachal Pradesh's Bilaspur and said that the hospital will be called the 'Green Hospital'.

"In the last 8 years, we have worked on ensuring development benefits reach the remotest parts of the country. AIIMS Bilaspur will not only increase access to affordable healthcare in Himachal but is also eco-friendly and will be known as 'Green AIIMS'," PM Modi said in his address in Bilaspur.

Terming the inauguration of AIIMS a moment of pride in Himachal, PM Modi said that the state has played a crucial role in "Rashtra Raksha" and the hospital will now play a "pivotal role in Jeevan Raksha" adding that Himachal is one of the three states chosen for establishing Bulk Drugs Park that will ensure the access to affordable medicines in India.

"Himachal Pradesh is also one of the four states chosen for Medical Device Park. The foundation stone that has been laid in Nalagarh, is a part of this," he said.

He said that Medical tourism is another important sector needed to be promoted in Himachal so that when people from across the world would come to India, they shall visit Himachal for its holistic healing with world-class health facilities and a beautiful and healthy environment.

To ensure the ease of living for the poor and middle-class sections of society, PM Modi said, "It is the Centre's attempt to minimise the expense on medicines and also to ensure that they get the required treatment without going to far off places."

PM Modi also said that it is the priority of the "double-engine government" in Himachal Pradesh to ensure the dignity of the people.

"It is the priority of the double-engine government to ensure the dignity of mothers and sisters by providing them with safety, security, respect, and health," he said.

He further called the state "the land of opportunities" and said that tourism here provides immense opportunity for employment, fertile land for growing fruits and vegetables, and generating electricity.

In his address, PM Modi said that the various development projects could be launched in the state only because of the people here and also lauded Chief Minister Jairam Thakur for his prompt functioning to bring the plans into action.

"The inauguration of AIIMS Bilaspur, Atal Tunnel, Hydro-Engineering college (at Bandla), and Medical Device Park (at Nalagarh), it all could be possible because of your votes. It is because of you only that you bless me and when I bring development projects to the state, Jairam Thakur turns them successful," he said.