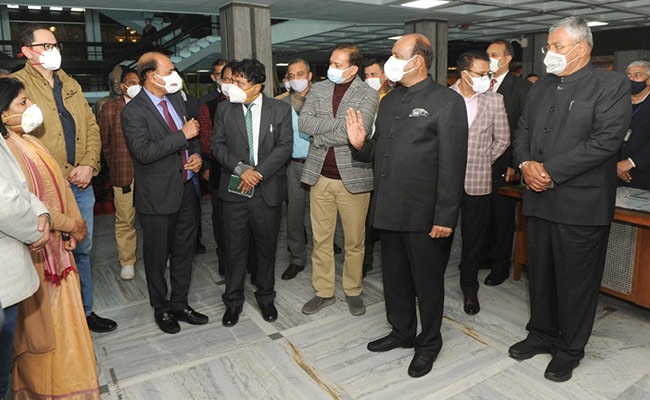 Lok Sabha speaker Om Birla on Tuesday inspected the Parliament House Complex (PHC) to take stock of the health safety-related measures and other preparations in light of the recent spike in COVID-19 cases in the country.

The budget session is expected to begin later this month.

Mr Birla directed officials to take special care of MPs above the age of sixty years and attend to their requirements in a proactive manner.

The Speaker told reporters that he has held a discussion concerning COVID-19 measures with Rajya Sabha Chairman Venkaiah Naidu.

"I have told the secretary-general to make necessary arrangements seeing various possibilities," he said.

Mr Birla visited the COVID-19 testing facility set up in Parliament House Annexe for the Members of Parliament, officers, and staff of the Lok Sabha and Rajya Sabha Secretariats and reviewed the preparations there.

"We have made arrangements for testing and vaccination in the Parliament complex. It is true that a large number of officials in the Parliament have tested COVID positive. All the officials are fine. They are being monitored and taken care of by the doctors," he said.

The Speaker said necessary preparations are being done so that the COVID guidelines can be adhered to.

"I hope that all of our officials remain safe amid this situation of the spread of infection and also our members can discharge their duties properly. The Parliament is making all the arrangements," he said.

Speaking to doctors and other corona warriors at the medical centre, Birla took a measure of the facilities currently available and directed that all additional resources may be made available on priority.

Mr Birla said the situation is under control and all steps are being taken to mitigate the impact of the pandemic.

He said sanitization and other arrangements are in place at all places, as per official guidelines and SoPs.

Rajya Sabha Chairman M Venkaiah Naidu and the Lok Sabha Speaker had on Monday directed the secretaries-general of both Houses of Parliament to examine in detail the prevailing scenario of the spread of COVID-19 and suggest effective measures for the safe conduct of the budget session which would begin by the end of this month, sources said.

They desired a review of the adequacy of the COVID protocol followed during the last winter session in the context of the present scenario of the spread of infections.