Agreed! says Parliament to Anna; fast ends at 10 am 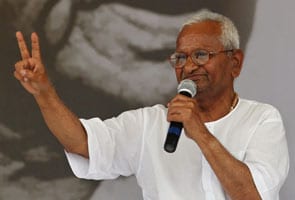 New Delhi: Surrounded by a sea of flags, Anna Hazare received the news that his three conditions have been unanimously accepted by Parliament. At his protest camp at Ramlila Maidan in Delhi, thousands gathered to celebrate the 74-year-old and his role in helping India take a huge step forward towards a historic new anti-corruption law.

Anna will end his fast at 10 am. Now on Day 12, of his hunger strike he has lost 7.5 kgs; his doctors say they are seriously worried about his health.

"Parliament has spoken. The will of Parliament is will of the people," said the Prime Minister. (Watch) A letter signed by him was delivered in a moment of drama and political opportunism to Anna on stage at Ramlila Maidan. The letter-bearers included Vilasrao Deshmkuh, who is from Anna's home state of Maharashtra and shares a good rapport with the Gandhian. (Read PM's letter to Anna Hazare)

"We have won half the battle," said Anna, thanking the thousands of workers and supporters who helped elevate his movement to the top of the country's agenda. "It is your victory," he said. "I will end my fast with you at 10 am" he said to huge applause. "Celebrate what we have won, but please be peaceful," he urged. (Watch)

Welcoming the move, Anna's associate Medha Patkar said, "We have reached a win-win situation...We have also emerged with an empowered Parliament."

The government held its ground and did not conduct a vote, as Anna's associates had demanded in the afternoon. Instead, the Lok Sabha and Rajya Sabha unanimously adopted a resolution that conveyed "the sense of the House." The resolution was shared by Leader of the House Pranab Mukherjee in his speech that concluded today's parliamentary debate on the Lokpal Bill. It is being formally delivered to Anna in a letter signed by the Prime Minister.

Different government leaders said that because the resolution was unanimously accepted, there was no need for a vote.

The Lokpal is an ombudsman committee that will be set up by a new law to investigate charges of corruption against public servants. Anna wanted it to be born with three must-have powers. These have been cleared today in principle. (Read what Parliament has agreed to)

In Parliament, both Leader of the Opposition Sushma Swaraj and Finance Minister Pranab Mukherjee referred to the fact that nine times, the Lokpal Bill has been introduced in Parliament but was not pushed through. "I accept the lapse of our governments," said Mr Mukherjee, while concluding the debate. However, he reinforced his party line: "One piece of legislation, however strong and empowered it may be, cannot completely eradicate corruption." Mr Mukherjee also warned, "There is a difference between mobocracy and democracy." Mr Hazare's methods have been criticized by many, including Rahul Gandhi, who delivered a rare speech on the Lokpal Bill in the Lok Sabha on Friday. (Read: BJP slams Rahul speech) | (Read: Time to raise bar of accountability, says Jaitley)

So political parties have signed off on Anna's trio of essentials: The Lokpal model will be introduced in states; junior bureaucrats will be accountable to it; and citizen's charters will be displayed in all government offices to publically display that department's duties. These features have been accepted in principle; they will now be reviewed by a parliamentary standing committee which will also check their compatibility with the constitution. The committee will then send the bill back with detailed feedback to Parliament for its consideration.

The hours before both the Lok Sabha and Rajya Saba voted in favour of Anna's three must-haves were drenched with the tension that has been characteristic of the last few days of negotiations between his group of activists and the government. The Lokpal debate was initiated by Finance Minister Pranab Mukherjee in the Lok Sabha. A series of impressive speeches followed, topped by BJP leader Sushma Swaraj. "Let us show the country that its representatives can function well and conduct a healthy and mature political debate devoid of partisan acrimony," she urged.

Since last night, the government had been working on a carefully-calibrated plan to find a way to satisfy Anna without undermining Parliament and its right to legislate. Senior ministers consulted last night and again this morning with both Anna's associates and the Opposition. But by 3 pm, the plan, as it has so often in the last few days, fell apart.

Anna's associates, who arrived at Parliament while the Lokpal debate was underway, said they were also told that instead of a resolution, Parliament would issue a statement to convey "the sense of the House." They said unless there was a vote in both Houses, the deal was off.

"If no resolution will take place or no voting will happen and if this is the response given to Anna Hazare's letter then it is very unfortunate," said Anna's aide, Prashant Bhushan. "It is a clear case of betrayal," said another member of Anna's inner circle, Arvind Kejriwal.

Promoted
Listen to the latest songs, only on JioSaavn.com
The Prime Minister then met with senior ministers and with the BJP's Sushma Swaraj and LK Advani. The close coordination between the government and the Opposition today was impressive. The BJP announced it would agree to a vote.

While the debate was being conducted in both the Rajya Sabha and Lok Sabha, Ramlila Maidan was filling up. In the afternoon, actor Aamir Khan addressed the audience and urged Anna to end his fast. He also performed a song from his hit movie, Lagaan. "We have to thank Anna for putting this bill and the issue of corruption in the spotlight." He stressed, "We need to decide as to how we are going to live our lives... Will we give or accept bribes? Will we say no to corruption in our lives?"